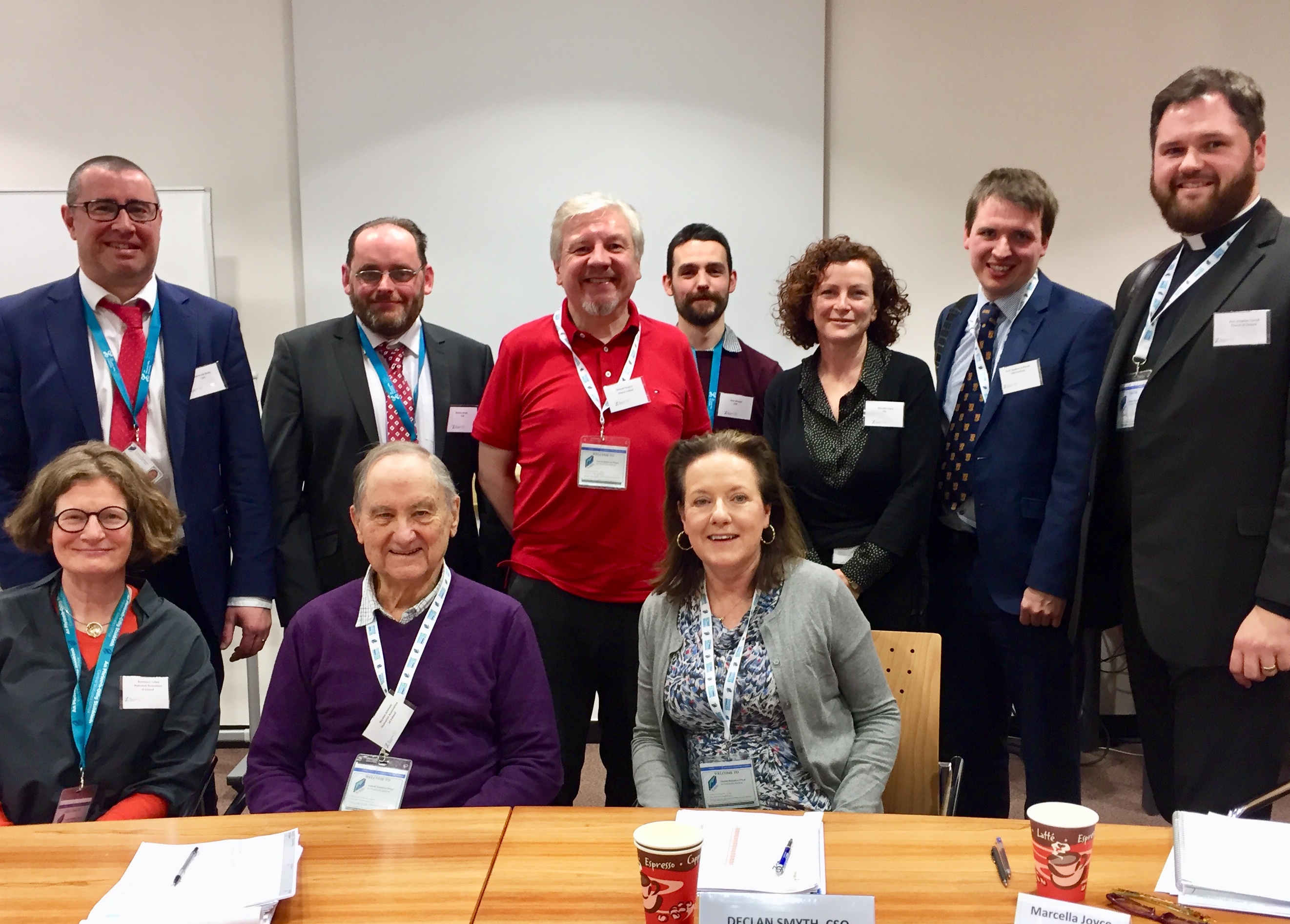 Atheist Ireland attended a three-meeting yesterday of the Census Advisory Group on the religion question for the 2021 census. We had previously made this written submission to the process. At the meeting, we added the arguments outlined in this report. We will report later on the content of the meeting.

The CSO staff are now considering the arguments made. They will then design and test two possible changes to the religion question with a sample number of households later this year. We will remain in consultation with them during this process.

Here are the arguments that we added at yesterday’s meeting.

The most important consideration in redesigning the question on Religion for Census 2021 is to design the most accurate method of gathering and analysing the data for this and future censuses.

1.1 The question should be located neutrally, well away from the questions on ethnic and cultural background and language.

1.2 The question should not assume an answer, i.e. that the person answering the question has a religion.

1.3 It should distinguish between religions and denominations.

1.4 Check-boxes should not be used, as they bias the results, most obviously shown by the doubling of Methodist figures when given  a check-box, and its halving when the check-box was removed.

It is particularly important to prioritise accuracy, given that the question on Religion does not allow for continuity in comparing historical results. This is because the question has repeatedly evolved in the areas of:

As a separate project, the CSO should seek funding to apply a new best-practice method retrospectively to the historical data about religion.

3. Balance of Outcome and Resources

The main resource implication would be in removing the tick-boxes, and returning to the traditional write-in box for answering the question.

The resources should there to implement that change, as 40% of the questions already involve a write-in box for some or all of the answers.

Also, the religion question would be easier for the software to handle than existing questions, with fewer words to recognise and repeated more frequently.

The most important consideration in redesigning the question on Religion is to design the most accurate method of gathering and analysing the data for this and future censuses.

There are three ways of measuring religion: affiliation, belief, and practice. The most useful measure for the purposes of the census is practice, and in particular frequency of practice.

This can help public authorities to make appropriate decisions in areas like the influence of religion on schools and hospitals, and planning issues related to religious buildings and events.

The Roman Catholic Church in particular uses the census figures to describe the number of Roman Catholics when lobbying on issues such as denominational schools.

1.1 The question should be located neutrally

The England and Wales census has already made this change, by moving the question on Religion away from the question on ethnic and cultural background, based on arguments made by Professor Abigail Day of the University of Sussex, a member of the Office of National Statistics Academic Advisory Board for the 2011 Census.

1.2 The question should not assume an answer

The current question is ‘What is your religion?’ This question assumes that the person answering has a religion, and therefore biases the results. The question should begin with: ‘Do you practice a religion?’ and only then go on to ask what that religion or religious denomination is.  It should then ask about frequency of practice, using the methods that the CSO has already decided on for the question about the Irish language.

There is an alternative approach to not assuming an answer, but it would be too complicated for the purposes of the census.That would be to incorporate nonreligious philosophical worldviews into the question, but on an equal footing as opposed to being an alternative to religion. So a hypothetical question could be something like: ‘What is your worldview?’ with an explanation that this could be philosophical, religious, atheistic, spiritual, ethical, political, or other. To stress, we are not proposing this. We are highlighting what you would have to do to accurately, and fairly, incorporate nonreligious worldviews into the question.

1.3 It should distinguish between religions and denominations

The current question asks ‘What is your religion?’ then lists a mixture of four denominations of one religion, Christianity, and one religion, Islam. Up to 2002, the instructions asked people what denomination they belonged to, and explicitly requested Protestants not to describe themselves by the vague term ‘Protestant’ but to enter the name of their particular church, denomination, or body. This distinction is also important today for denominations within Islam, such as the Ahmadiyya Muslim Community, who are discriminated against and persecuted by other Muslim denominations who tell them that they are not Muslims.

1.4 Check-boxes should not be used, as they bias the results

For the fourteen years between 2002 and 2016, the century-and-a-half method of people using their own words to answer the question has been replaced by a leading set of check-boxes. Every religion increased its figures when given a check-box. Apart from Roman Catholic, they all increased by much more than the the national increase in population. While immigration of minority faith members contributes to these figures, it is not enough on its own to explain them.

1.4.1 Methodist Figures with and without Check-boxes

The figure for Methodist most clearly demonstrates this effect, as it was given a check-box in 2002, then lost it in 2011. We can therefore compare its figures before, during, and after.

The increase, and particularly the later decrease, is larger than can be accounted for by coincidental immigration then emigration of large numbers of Methodists.

There is a further anomaly here. The five check-boxes seem to be based on the five most frequent answers from the previous census. However, Orthodox outnumbered Methodist in 2002 (by 10,437 to 10,033), so it should have got the fifth check-box in 2006. However, Methodist retained the check-box for the 2006 census, and Orthodox only got it in 2011.

1.4.2 Other Denominations and Religions with Check-boxes

We do not have the same historical data for Islam and Orthodox. Nevertheless:

The question on Religion has never been dealt with in a way that allows for continuity in comparing the results. This is because the question has repeatedly evolved in the following six areas: (a) headings, (b) instructions, (c) method of entry, (d) language, (e) compilation, and (f) obligation to answer. See details below.

The area that comes closest to having continuity is that, for over a century and a half, people chose their own words to describe their answer to the question, and for the last 16 years this has been changed to include tick-boxes that favourably weight some answers above other answers. We can remove this aberration by returning to the write-in answer format.

Given the illusory nature of comparing historical results, the priority for this census should be to design the most accurate method of gathering and analysing the data for this and future censuses. That would enable future historians to compare accurate results, as opposed to continuing to compare inaccurate results.

As a separate project, in order to enable historians to seriously compare historical results, as accurately as is possible given the evolution of the question, the CSO should seek funding to apply that best-practice method retrospectively to the historical data about religion, along with an explanation about the limitations of the evolving question.

2.1 Evolving Headings of the Question

2.2 Evolving Instructions Written on the Form

2.4 Language on Irish and English Versions

As an aside, the 1926 Census report states that:

“The 1926 census was compiled by machines, which sorted and counted cards punched in accordance with code numbers given to each religion, birthplace, occupation etc. The scheme of machine operations made it possible to compile statistics of religion, Irish language, age, etc, as by-products, while sorting the cards in relation to other subjects. To take full advantage of this scheme, it was necessary to confine attention to the principal religions only, otherwise the cost of compiling the statistics of religion would have been much more than doubled.

On this account, and in order to be in a position to meet fully the more insistent demands for as much information as possible which would throw light on the economic structure and conditions of the country, it was decided, in view of the results of the 1911 census, to compile particulars for only the following six religions: Catholics; Protestant Episcopalians (including Church of Ireland, Church of England, Protestants); Presbyterians; Methodists; Jews; Baptists.”

This may explain why we are used to seeing census presentations focusing on a small number of religions or denominations. However, before 2002, the results came from the opposite direction than they do now. People then wrote in their religious denominations, and the results were calculated from that. They were not given a set of check-boxes with selected religions on the census form. Also, computer software today makes it unnecessary to restrict cross-comparisons to a small number of religions or denominations.

3. Balance of Outcome and Resources

The main resource implication would be in removing the tick-boxes that were introduced in 2002, and returning to the traditional write-in box for answering the question.

The resources should be there to implement that change, given that:

3.2 Questions that all or most people have to write in

3.3 Questions that some people have to write in