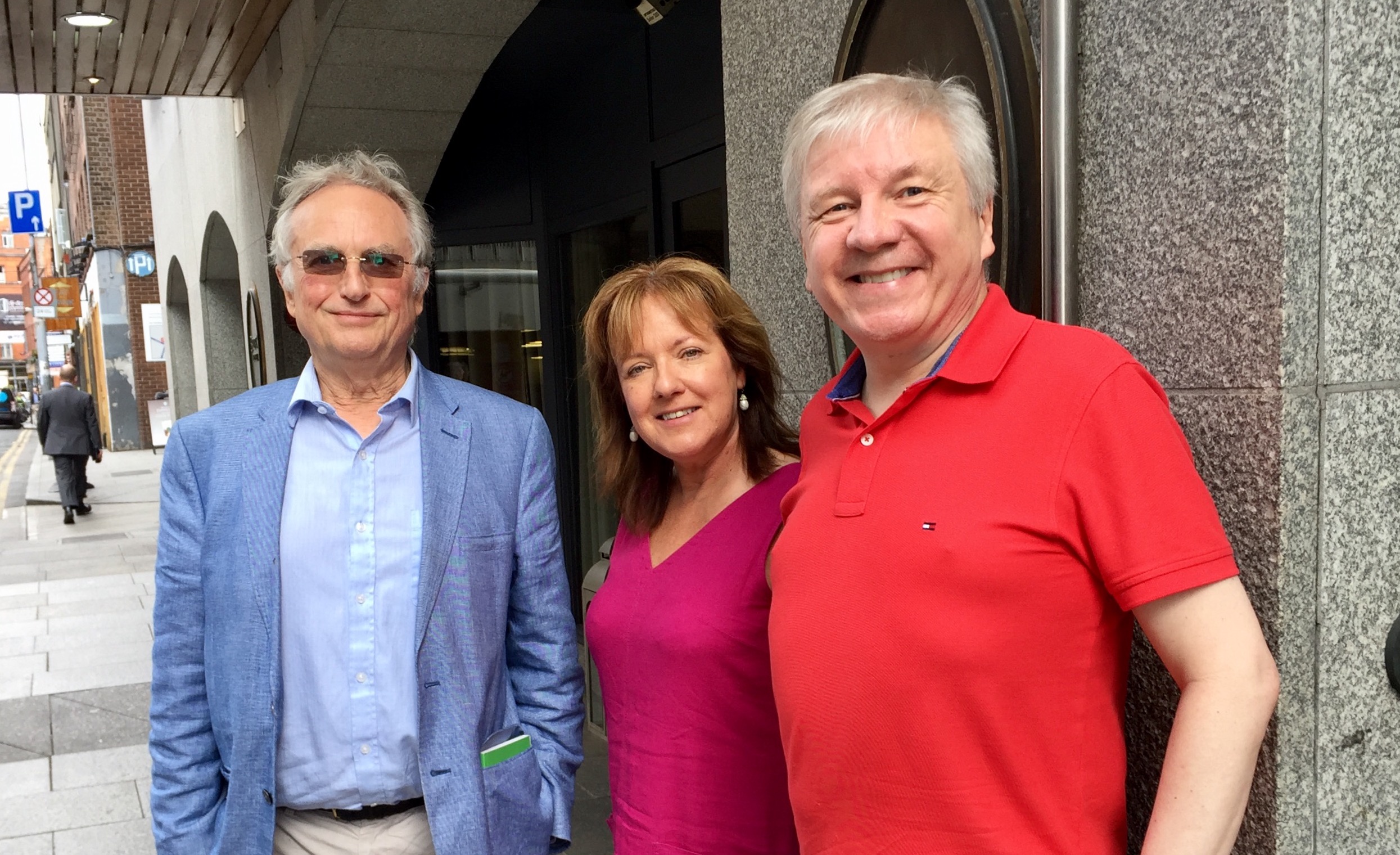 I have today sent this letter to Quincy McCoy, General Manager of KPFA Radio in California.

Dear Quincy, I am writing to ask you to reconsider your approach to the problem that you have created by unilaterally breaking your agreement to host Richard Dawkins speaking about his new book Science in the Soul.

This includes the impact of your behaviour on your station’s editorial and commercial integrity, on the public discussion of harmful ideas and ideologies, and on the campaign against human rights abuses caused by Islamism, most of the victims of which are Muslims.

I campaign for secularism and human rights in Ireland and internationally, including at the United Nations. I campaign both with Richard Dawkins and also in a unique alliance for secularism between Irish atheists, Evangelical Christians and Ahmadiyya Muslims.

Like Richard, I have had a speaking event unilaterally cancelled. Mine was speaking about atheism to final year students in a Roman Catholic school. Thankfully, the school board reconsidered, and honoured their original agreement. I hope you are open to doing the same.

Richard also faced a similar situation last year with the North East Conference on Science and Skepticism, as did Maryam Namazie of the Council of Ex Muslims of Britain with Warwick University Students Union.

After being asked to reconsider, each of these institutions reinstated the invitations, and apologised to Richard and Maryam respectively. I hope this letter will help to persuade KPFA to follow the example of these other bodies, and to revisit your decision.

I am asking you to rearrange the original event, to apologise to Richard and to those who had bought tickets, and to generally reconsider your approach to opinions that are critical of the human rights abuses caused by Islamism, most of the victims of which are Muslims.

In this letter I will address:

1. The problem with your current approach

At the moment, your approach to your problem seems to be ad-hoc and contradictory. You are thus increasing the damage to your editorial and commercial integrity, and also to your reputation as an institution that can be trusted to keep its word to those who engage with you.

There is a major distinction between a decision to not invite someone, and a decision to publicly ‘uninvite’ someone after publicly inviting them. In this case, Richard has done nothing so unpredictably outrageous to justify unilaterally breaking an existing agreement.

You first unilaterally cancelled the event, because you mistakenly concluded that Richard’s opinions about Islam were not only harmful, but were so harmful that that you could not even sponsor an event where he was talking not about Islam but about science.

Now you are inviting Richard to discuss your controversy on the airwaves. This suggests that your concern has now shifted. Originally you were unwilling to host Richard because of his views. Now your concern is merely about the venue at which you want to host him.

But if you are prepared to host Richard talking about Islam on your station, why can you not honour your agreement to host him talking about science at the originally planned event?

You seem to have expressed two answers to this dilemma.

So neither of your implied reasons seem to stand up to scrutiny. Also, your current emphasis on wanting to be able to challenge Richard’s assertions creates the impression that it is Richard, and not you, who has acted improperly. I disagree with this. Let me explain why.

2. Why your original decision was unjustified

Your original announcement of your decision to break your agreement with Richard and your ticket buyers said it was because ‘he had offended and hurt, in his tweets and other comments on Islam, so many people. KPFA does not endorse hurtful speech. While KPFA emphatically supports serious free speech, we do not support abusive speech.’

You later added that ‘We serve a broad and diverse community, including many Muslims living under threat of persecution and violence in the current political context. Islamophobic rhetoric stokes that threat.’ I’ll address later why I disagree with your implied analysis of the word ‘Islamophobia’, but for now let’s take your reason at face value.

In a news item justifying your behaviour, you interviewed Lara Kiswani, Executive director of the Bay Area based Arab Resource and Organizing Center. She said that she had contacted ‘her partners in the station’ when she heard of the event. You also allowed her to make unchallenged defamatory allegations on air, including that Richard is ‘a well-known Islamophobe’.

But Lara herself, at an event in UC Berkely, is reported here as saying that ‘bringing down Israel will really benefit everyone in the world and everyone in society,’ and she told a student who questioned her that ‘as long as you choose to be on that side, I’m going to continue to hate you.’ She has also expressed other controversial views.

How could you consider whatever Richard has said about Islam to be so hurtful that you could not even sponsor him talking about science, while justifying that decision by interviewing somebody who has explicitly said that she hates people because of their beliefs?

To be clear, I fully support your right to interview Lara Kiswani about her views, within the limits of defamation law. However, based on the criteria that you used to break your agreement to host Richard, and assuming that you have the same concern for Jews as you do for Muslims, you should not agree with your station hosting Lara.

Philip Maldari then gave further reasons on his Sunday Show. He said that he had pulled out as host of the original event, because he had heard about things that Richard had said or written. But the descriptions that he gave on the Sunday Show were misleading and incomplete.

I completely understand how this happened, as there is a global cottage industry of misrepresenting and demonising Richard. I give links to some examples of this later in this letter.

Nevertheless, Philip could have clarified the accuracy of these concerns, by seeking further information from Richard before pulling out as host. Instead, he just unilaterally pulled out based on that incomplete information. I believe that decision was unethical and unprofessional.

3. Your profiting from Chris Hedges and Christopher Hitchens

Can I ask you to compare and contrast your approach to this problem with your approach last October to the launch of Chris Hedges’ book Unspeakable, and to your profiting from $300 pledges for a media archive that includes a debate with Christopher Hitchens?

Chris Hedges is also a controversial author whose writing can hurt people. Indeed, he was disinvited from a peace conference in the University of Pennsylvania in 2014, because he published a column comparing ISIS to Israel.

Despite this, you (rightly) hosted a similar book talk last October for him. Ironically, you hosted it in conjunction with Project Censored, and the full book title was ‘Unspeakable: on the most forbidden topics in America.’

You also currently advertise an offer on your station whereby, for a pledge of $300, listeners can get a Chris Hedges media archive collection, which includes a debate between Chris and the late Christopher Hitchens.

Here is a link to an article by Christopher Hitchens titled ‘God fearing people: why are we so scared of offending Muslims?’

Here is a link to an article in which he said ‘But at the moment, it’s very clear to me the most toxic form that religion takes is the Islamic form… The whole idea of wanting to end up with Sharia with a religion-governed state — a state of religious law — and the best means of getting there is Jihad, Holy War, that Muslims have a special right to feel aggrieved enough to demand this is absolute obscene wickedness and I think their religion is nonsense, in its entirety.’

By your own criteria for breaking your agreement on this event, it just doesn’t make sense. You should either reconsider your decision regarding Richard, or else remove this pledge offer from your website.

4. The word Islamophobia and the demonising of Richard Dawkins

More fundamentally, as well as all of the above, I disagree with your assessment of Richard’s views generally. You are coming to false conclusions based on incomplete information. I attach links to several articles that I have written about the global cottage industry of misrepresenting his views.

I also disagree with the use of the word ‘Islamophobia’ to silence legitimate criticism of human rights abuses by Islamist regimes, most of the victims of which are Muslims.

It is important that we challenge anti-Muslim prejudice and bigotry, while also continuing to challenge harmful ideologies. I attach links to several articles that I have written about the problems with legitimising the word ‘Islamophobia’.

To conclude, I am asking you to rearrange the original event, to apologise to Richard and to those who had bought tickets, and to generally reconsider your approach to opinions that are critical of the human rights abuses caused by Islamism, most of the victims of which are Muslims.

On the weekend that you announced your decision, Richard and I were at an international conference in London on freedom of conscience and expression, at which seventy speakers from thirty countries worked together to promote secularism and human rights for everybody.

That conference passed a declaration, which I assume you have read, asking you to reconsider your decision on this. But even if you disagree with us about this, your approach to your current problem has been ad-hoc and contradictory.

Even by your own criteria, you should either decide to honour your original agreement, or else radically revise your editorial and commercial decisions about other guests who discuss controversial or contested topics.

I look forward to hearing that you have reconsidered this.

Jerry Coyne on Why Evolution is True has a series of posts that cover the timeline of this incident.