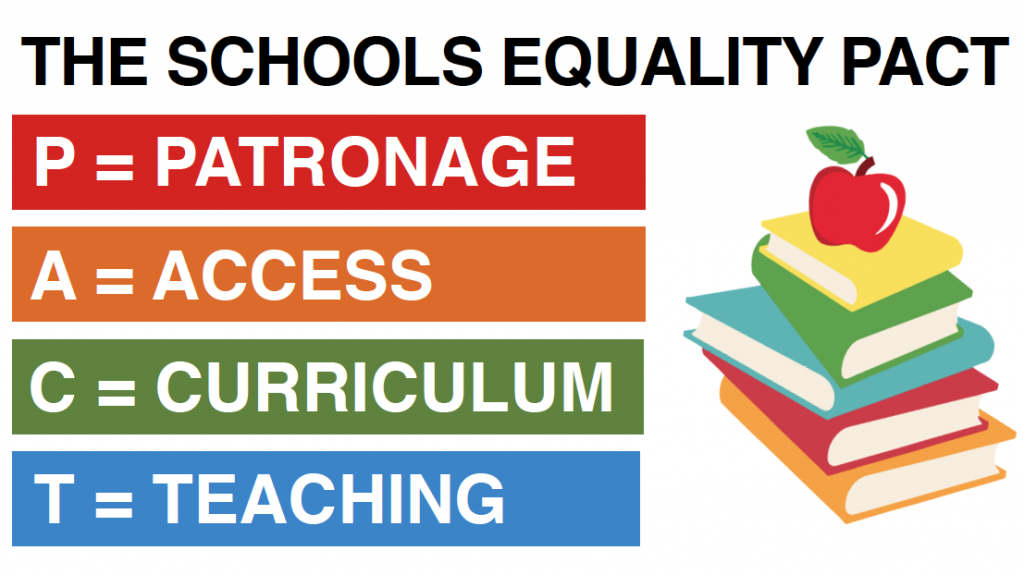 The Schools Equality PACT is a major new initiative of Atheist Ireland to enable everybody, regardless of your religious or nonreligious beliefs, to support religious equality in Irish schools.  It is part of an ongoing campaign of national political lobbying, and representations to UN and other international human rights bodies.

Irish primary schools are State-funded but privately run, 90% by the Catholic Church and most of the rest by other religions. Religion is integrated throughout the school day. State-funded schools have the legal right to discriminate against children, parents and teachers on the ground of religion.

The State has a duty to respect equally the human rights of all children, parents and teachers. This requires a national network of public secular schools, inclusive of all, neutral between religions and atheism, and focused on the educational needs of all children equally.

Divesting some religious schools to new private patrons will not achieve pluralism in education. The Oireachtas Education Committee has warned that multiple patronage and ethos can lead to segregation and inequality. The UN and Council of Europe have warned our schools breach human rights.

The State now claims it is constitutionally obliged to allow State-funded schools to discriminate against its own citizens in this way. Others disagree. We ask the Government to respect democracy, and stop closing down debate with an unpublished, untested legal opinion.

Finally, if the Courts do find that the Constitution obliges the State to support this discrimination, then we urgently need a Schools Equality Referendum.

Children have a right to attend inclusive public schools

State-funded schools should have an inclusive public ethos, to respect everyone equally under Articles 42.1 and 42.3.1 of the Constitution. Moral education should be separate from religion, as per Article 42.3.2. The State should not cede control of education to private patrons. Private ethos schools should be an optional extra, not the basis of the system. Please amend the Education Act to do this. Start the reform in the nine schools where the Minister for Education is patron.

Children have an equal right to attend their local public school

Children should have equal access to their local State-funded school, whatever their religion. The current Admission to Schools Bill will outlaw some discrimination, but it reinforces discrimination against atheist and minority faith families, calling it ‘lawful oversubscription criteria.’ Please delete Section 7.3(c) of the Equal Status Act to prevent all religious discrimination. If oversubscribed, give priority to children with siblings in the school, then to local children, then use a lottery.

Children have a right to an objective pluralist education

Children should be taught the State curriculum, including teaching about religions and beliefs, in an objective, critical and pluralistic manner, as per the European Convention on Human Rights. Faith formation should be outside the school day. Please amend Section 15.2(b) of the Education Act, and the curriculum. Remove Rule 68 of National Schools, that religious instruction is by far the most important subject and a religious spirit must inform and vivify the whole work of the school.

Teachers have an equal right to work in state-funded schools