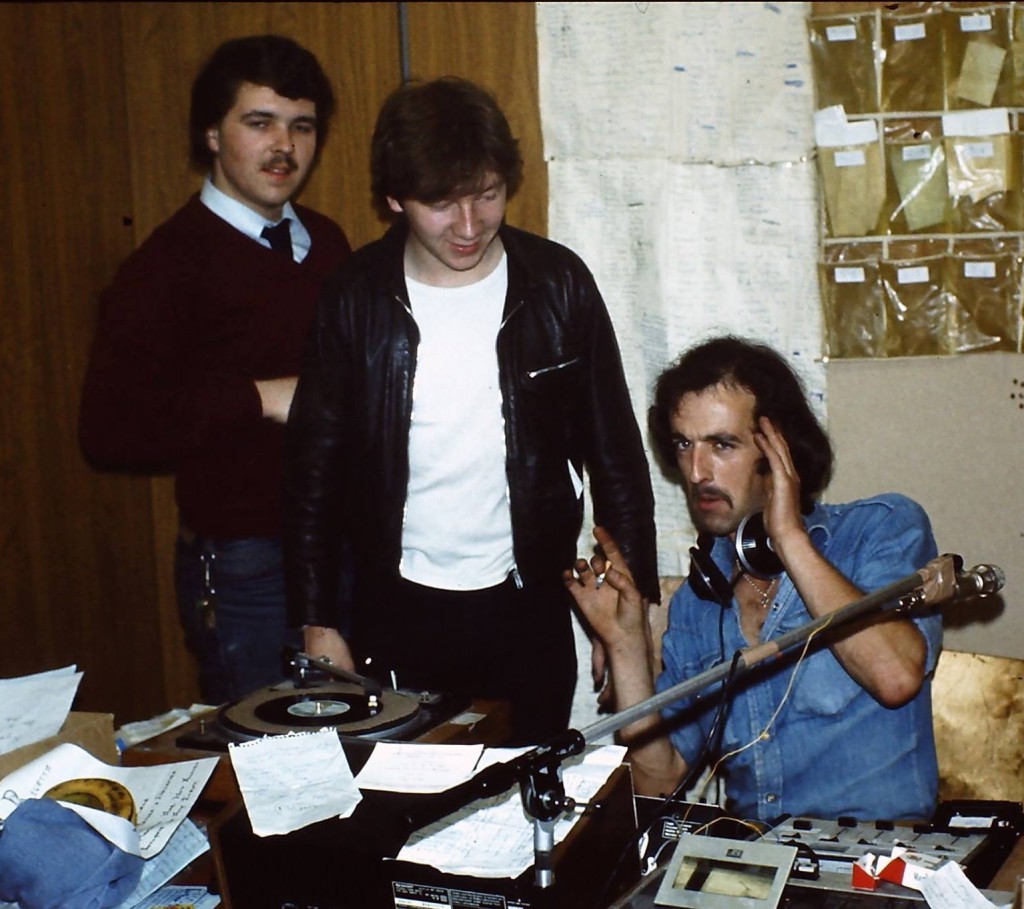 ‘Big Al’ O’Rourke has just sent me this photo of Victor Ryan, me and Al from our pirate radio days in the early 1980s. That’s me in the centre, when I was in my early twenties. Al’s picture looks like it was taken at Wicklow Regatta Radio, during which, as well as our radio duties, Al and I took part in a community festival spaghetti eating competition.

Dublin had many pirate radio stations at that time, ranging from Radio Dublin in Inchicore, Alternative Radio Dublin in various locations on the northside, and Big D Radio near what is now the ILAC Centre, to the super-pirates Radio Sunshine and Radio Nova with their more powerful FM transmitters.

One Sunday I started visiting Radio Dublin, answering the phone and taking requests for my friend Aidan Cooney. For an hour every Sunday evening, Aidan became ‘Aidan Jay’ and ruled the capital’s airwaves from the front room of Eamon Cooke’s small terraced house in Inchicore.

As a college student, I presented weekly film reviews on Alternative Radio Dublin, getting in free to the Savoy to watch such epics as Airplane and Escape to Victory, and sometimes attending press screenings with real journalists. I then produced the Dublin Today show with Victor Ryan, before presenting my own mid-morning show after Chris Barry moved to Radio Nova.

The station’s owners, the charismatic ‘Doctor’ Don Moore who is now a psychic healer, and ‘Dave C’ Cunningham, seemed to exist like royalty without spending any money. They had contra-deals with advertisers who supplied them with free meals, petrol, furniture and whatever else they needed to live on.

Don and Dave asked me to manage the station but I declined, firstly because our rebel dinghy was by then fatally holed by the super-pirate battleships of Sunshine and Nova, and secondly because the offer contained none of the terms traditionally associated with such offers, such as getting paid.

Soon after, the station closed, and Victor, Al and I joined Dave Reddy in a station that provided local radio for various community festivals in Dublin and surrounding counties. It was the ultimate in local radio, with almost everybody tuned in for the duration of the festival. One of our studios was the garage in my parents’ house, for our local community festival.

Three months later, Labour Party TD Barry Desmond asked Taoiseach Charles Haughey in the Dail: “In relation to the programme announced by the Taoiseach, how can he possibly reconcile his Government’s preoccupation with the problems of law and order with the constant appearance of members of his Cabinet on illegal pirate radio?”

Haughey’s one-sentence reply was: “I do not know how anyone can appear on radio.”