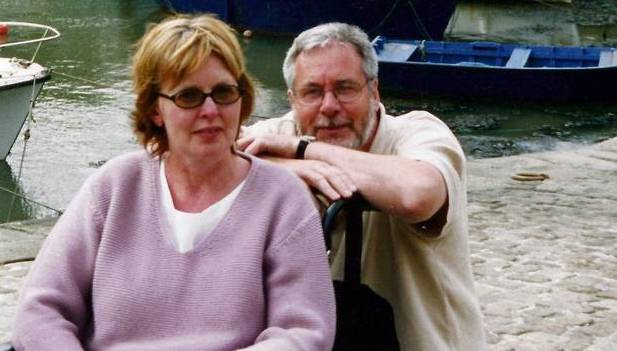 Right to Die Ireland today addressed the Oireachtas Justice Committee on the question of assisted dying. Here is our opening statement by Tom Curran, pictured above with his late partner Marie Fleming.

This is a quote from an American Journalist called Betty Rolland from the 1990’s after she was diagnosed with incurable cancer. To me, this sums up what the Right to Die is all about. It’s about choice. It’s about the ability to make decisions about your own end of life situation to possibly avoid a prolonged, painful and distressing death. It is commonly accepted that people have the right to live their life as they choose, providing they don’t do anyone else harm. So why should a person not have the right to make decisions about the manner of their own death?

The person I loved, Marie, suffered from MS and, many years ago, when her MS moved from relapsing-remitting to progressive, and she saw that it was taking more and more control of her life and her ability to live, she decided that the MS was not going to take control of her death. She knew that she faced the likelihood of a prolonged and possibly painful death and she, as the strong-willed person she was, she was not prepared to let that happen. Marie didn’t want to die. Far from it. Marie wanted to live, she was never suicidal, but she didn’t want a bad death.

When she explained her wish to me, it seemed a very natural thing to want. It was only then we discovered that what she wanted was, by no means, easy to achieve. As I had done voluntary work in suicide prevention for many years, I was aware that suicide had been decriminalised in the early 90’s in Ireland. This meant that taking her own life was not an issue. The problem was how to provide a peaceful and painless death.

Most of the irrational suicides that take place are performed in some horrific manner, but that would completely defeat the purpose of what Marie wanted to achieve. This brings up the question that, if it is legal for a rational person to take their own life, why is assisting a person to do something that is legal a crime? Or why is assistance necessary? I can’t answer the first question of why assisting someone to do something that is legal is itself a crime, but the second of why assistance is required can be answered.

There are two basic reasons why assistance is necessary. The first is to do with the method of providing a peaceful, painless death for yourself. This is not as easy as it may seem. There is almost nothing sold anywhere today that will achieve that aim. Of course, there are lots of substances that will kill, but not peacefully and painlessly. Any substance that will provide that is almost exclusively in the hands of the medical profession. But providing these substances would be classified as assisting a suicide, and is therefore breaking the law.

The second reason is that, in most cases, the reason for making the decision to die is because the person is suffering from some progressive and possibly incurable disease, which will eventually make it physically impossible for them to end their own life. To deny a person in these circumstances access to something that is legal, and available to any able-bodied person has to amount to discrimination.

Let me at this point try to explain why the issue of the Right to Die has recently become an issue around the world. The first reason is the advancement of medical science. This advancement has brought with it the fact that, in most parts of the world, people are living to much greater ages, than could have been imagined many years ago. But this brings with it its own problems. With people living longer comes the likelihood that they will spend the final years of their life suffering from some disabling illness. This will usually mean that the final years of their lives will be far from comfortable.

This is coupled with the fact that in the early- to mid-twentieth-century, people started to think for themselves, the civil rights movement sprang up around the world, and people were looking for personal freedom in lots of areas. The Right to Die is one of these, where people decided that death, which used to be a very family affair, had now become a medical procedure. This is borne out here in Ireland where over 80% of people wish to die at home, but less than 20% do. In fact, over 50% of people in Ireland die in acute hospitals and, in lots of cases, in multiple bed wards. This has made the whole process of dying clinical, and not the celebration of a life lived, as it used to be.

This situation made people question why they themselves had very little say in the way they died. And so the Right to Die movement started around the world. This has resulted in a slow but progressive acceptance that rational people should have the decision making powers on how they die. There are the usual arguments against allowing a person decide for themselves. They range from religion, to the danger to vulnerable people, to the co-operation of the medical profession. These arguments are easily countered.

Getting back to the situation here in Ireland, you are probably aware that Marie and I took a constitutional challenge to the law on assisted suicide. Some very interesting points were made in the summing up in the High Court. Let me outline a few of them here.

Apart from stating that Marie was one of the most remarkable witnesses to ever come before the court, they upheld the fact that Marie was being discriminated against by her MS preventing her having access to something that any rational able-bodied person has. To right this wrong, the only option that the High Court has is to declare that the law which allows this discrimination is unconstitutional, and the law has to be struck out. It is not within their powers to amend a law. They stated that, on a proportionality basis, they were not prepared to do this as that, without any law, vulnerable people would be open to abuse.

I agree completely with this decision. But they followed up by stating that there is nothing preventing the Oireachtas from enacting a law which would allow for assisted dying for people like Marie, and at the same time protect the vulnerable. None of the parties have had the courage to tackle this. The closest we have got is the presentation of a Private Members Bill by John Halligan, which was drafted by myself with the help of four barristers. This Bill has since been withdrawn, so we are no closer to providing this civil right to people that we were then.

The other interesting point to come out of the High Court was the statement in the summing up that, if the court could provide a law specifically for Marie, they would. To me this was an extraordinary statement to make. What they were saying is that they felt that Marie satisfied whatever criteria they would see as necessary to be allowed an assisted death. While to me Marie was an exceptional person, there was nothing exceptional in what she was asking for, and certainly nothing that would suggest that other people would not satisfy the same criteria.

Why, therefore, have we still got the situation, despite Marie having satisfied the highest court in Ireland that she should qualify for an assisted death, that this right is still denied to others?