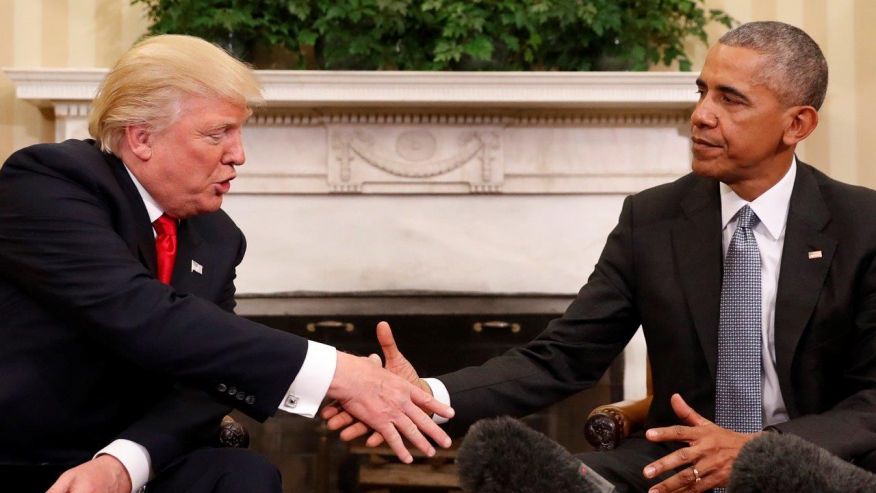 I hope that Donald Trump’s gracious acceptance speech, and his positive meeting with President Barack Obama, can begin to reverse the descent into the political gutter by both sides in the recent campaign, and can lead to what was impressed on candidate Trump by his opponents: the need for a constructive and peaceful transition of power.

During the campaign, two flawed candidates relied more on personal attacks on each other than on positively selling their own policies. This problem was exacerbated by an increasingly sensationalist mainstream media, with even an Irish Times article calling Trump a sack of orange diarrhoea. It was cheer-led by the usual keyboard warriors who love engaging in online smear campaigns, exaggerating people’s actual flaws and engaging in guilt by extreme association.

But the claims that Donald Trump is a fool or a fascist are as absurd as the claims that Hillary Clinton is a criminal or that Barack Obama founded ISIS. Whatever their flaws, all three of these people are intelligent, driven, successful, democratic people who are devoting significant parts of their lives to promoting what they believe to be best for their country and the wider world. They also each have the egos and tough skins and ruthlessness that are required to survive in the increasingly cut-throat world of politics, and the inevitable human tendency to make mistakes and to fool themselves in the process.

How can Americans rehabilitate their politics? A good first step would be to give the Trump Presidency a fair wind, based on the unifying message of his acceptance speech and his positive meeting with President Obama. Yes, of course, oppose policies that you disagree with. Yes, of course, remain vigilant about reversion to the campaign rhetoric. Yes, of course, respond to events as they unfold. And yes, of course, build steadily for the 2020 election. But start by being charitable, and give President Trump the benefit of the doubt you would have wanted his supporters to have given President Clinton had she won.

I suggest this not as a Donald Trump supporter, but as someone who has supported every Democratic Party candidate from Jimmy Carter forty years ago to Hillary Clinton this year. When I was still in school, I supported Carter and Walter Mondale against Gerald Ford and Bob Dole in 1976. Carter seemed to young naive me to be the ultimate good guy: a kind and thoughtful outsider, seeking to move from running his peanut farm to running America, competing against the man who had pardoned Richard Nixon after Watergate.

When I was in College and active in students union politics, I was captivated by Ted Kennedy’s concession speech at the 1980 Democratic Convention: ‘For me, a few hours ago, this campaign came to an end. For all those whose cares have been our concern, the work goes on, the cause endures, the hope still lives, and the dream shall never die.’ In the election, I supported Carter and Mondale’s appeal to civil rights and social progress, as they lost to Ronald Reagan and George Bush Senior’s appeal to American optimism and military strength.

In the ominously sounding 1984, I supported Walter Mondale and Geraldine Ferraro as they lost to the incumbents Reagan and Bush. Mondale, like Carter, ran on equal rights and social progress. Ferraro’s was the first challenge to the glass ceiling against women running as mainstream ticket candidates, with Diane Feinstein also on the short-list of candidates. But nothing that year could have matched the appeal to Americans of a landslide second term for Reagan and Bush.

I supported Michael Dukakis and Lloyd Benson in 1988, as they lost to George Bush and Dan Quayle. Dukakis was a decent man, unfairly maligned for not resorting to emotion when asked if his opposition to the death penalty would change if his wife was raped and murdered. Benson was also a decent man, in the days when ‘Senator, you’re no Jack Kennedy’ was considered a biting political attack. And so were their opponents, Bush and Quayle. Whatever their flaws, all four would have seemed so out of place in this year’s campaign.

I have always admired the Clintons, and my bookshelves are heaving with bulky pre-kindle books about their lives and their politics. I still have VHS videotapes of Bill Clinton’s debates when he beat George Bush and Ross Perot in 1992, and Bob Dole and Ross Perot in 1996. Bill Clinton combined the twin challenges of being good with policy and good with people, along with an ability to adapt to changing circumstances. Hillary was clearly part of the ‘buy one, get one free’ package, with her legal background and her commitment to social justice. There was also the quirky influence of James Carville helping to run the Clinton campaign while his fiancee Mary Matalin helped to run the Bush campaign.

When Vice-President Al Gore emerged from Clinton’s shadow in 2000, I supported him and Joe Lieberman as they lost to George Bush Junior and Dick Cheney, with Ralph Nader and Pat Buchanan running for the Greens and Reform parties. Gore struggled with the demands of presenting his formidable policy skills in a voter-friendly manner, but he did win the popular vote and arguably the electoral college. It was the first election where I believed that the outcome was not legitimate, but Gore conceded graciously after the legal challenges to the Florida recount had ended.

I supported John Kerry and John Edwards in 2004, as they lost to the incumbents Bush and Cheney. By now the attacks were starting to become more personal, with Kerry’s war record unfairly impugned along with the ridiculous charge that he was suspect because he could speak French. But by and large, although in these recollections I am emphasising Democratic candidates, the Republican and third party candidates of the past forty years were also men and women of intelligence, civility and integrity.

In 2008 I supported Barack Obama and Joe Biden, and their message of unity and hope, against John McCain and Sarah Palin. With Hillary Clinton failing to get the Democratic nomination, it was the first election since 1976 without either a Bush or a Clinton on the tickets. I was impressed by McCain’s refusal to be drawn into attacking Obama on the question of his religion, when he could have gained political capital by doing so. I supported Obama and Biden again in 2012 as they defeated Mitt Romney and Paul Ryan. All four candidates in that race would have been horrified at the level of debate that the campaigns would descend into by 2016.

This year I supported Hillary Clinton and Tim Kaine against Donald Trump and Mike Pence. For the first time my personal prejudice in favour of the Democrats and the Clintons was challenged by the nature and revelations of the campaign. Not only were both sides engaged in unfair personal attacks, but the impartial Bob Woodward declared the Clinton Foundation to be corrupt. And yet if I had a vote, I would still have preferred Hillary to be President ahead of Donald Trump.

Trump fought a ruthless campaign, which I did not like, based on emotive appeals to fears and on unfairly negatively branding his opponents: who can now ever forget Little Marco, Lying Ted, Low-Energy Jeb and Crooked Hillary? His opponents, and the media, returned that tactic multiplied many times over, as the campaign descended further into the gutter. But the lower the campaign went, the lower went people’s expectations of any of the candidates, and indeed of politics itself.

I first thought Trump could win when the polls after the FBI email case was re-opened showed a drop in support for Hillary. But the reason that I thought he could win was that most of the actual polling had taken place before that announcement. The tide was already turning. And while Trump needed to swing a lot of States to reverse Hillary’s lead, if he had any swing in his favour, that swing was likely to carry across all of those States.

Now that the campaigns are over, Trump has made the first moves towards reconciliation. And both Hillary Clinton and Barack Obama have reciprocated. For its own sake and for the wider world’s sake, America needs to restore confidence in in its politics. A good first step would be to give the Trump Presidency a fair wind, based on the unifying message of his acceptance speech and his positive meeting with President Obama.

As a supporter of the Democratic Party, I am more concerned about the Republicans holding the House and the Senate than I am about President Trump. Donald Trump is a pragmatist, not an ideologue, and in many ways he is closer to being a Democrat than a Republican. It now seems likely that any Republican candidate would have beaten Hillary Clinton, and I would prefer to see President Trump than President Cruz or President Rubio.

As a supporter of democracy generally, another good step would be to reform the electoral system. Sometimes, as in this election, a candidate can win the popular vote yet lose the election. This seems unfair, but the popular vote outcome is misleading. The outcome would be different if there was a straight vote across the country, as the electoral college system influences canvassing strategies.

In the current system, parties tend to mostly ignore States where they have no chance of winning, and mostly focus on swing States. In a straight vote across the country, they would canvass everywhere equally, or at least proportionately to the population. Also, using single transferable votes would be more representative than first past the post, as voters could vote for third party candidates without thinking they are wasting their vote.

For the popular vote outcome to be meaningful, which it ideally should be, the system needs to be changed to a straight vote across the country, using single transferable votes. That would also enable third parties to evolve, based on specific ideological policy manifestos, rather than having to crowbar votes into one of two inevitably compromised policy positions. But that is a debate for another day. The most important immediate issue, as was impressed on candidate Trump by his opponents, is a constructive and peaceful transition of power.

I wish President Trump, the American people and their political system all the best in the next four years.