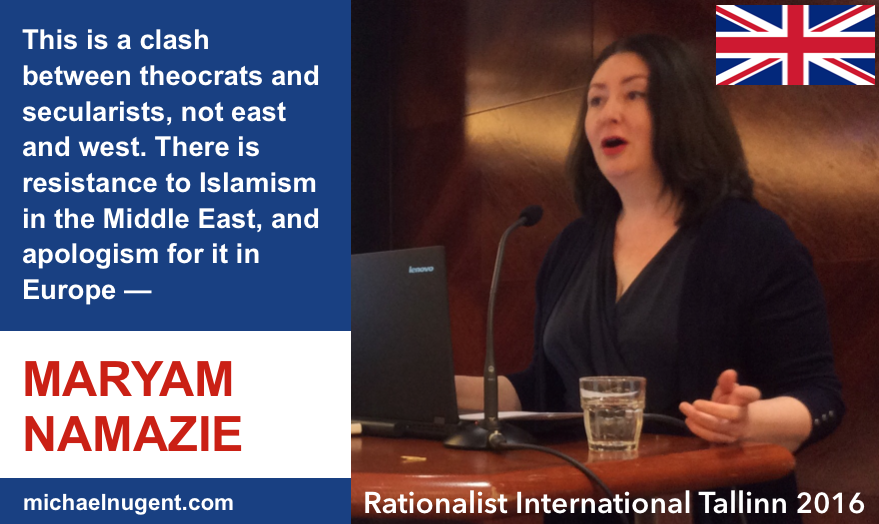 Maryam Namazie is one of the most important and courageous human rights campaigners that I have the privilege to know and work with.

She has launched a new website at MaryamNamazie.com which will cover all of her work, videos, press coverage, photos and more.

Atheist Ireland is happy to have helped Maryam to design and host this website, and I would like in particular to thank our secretary Helen O’Shea for her excellent work on this project.

Maryam is the Spokesperson for Fitnah – Movement for Women’s Liberation, Equal Rights Now, One Law for All and the Council of Ex-Muslims of Britain.

She hosts a weekly television programme in Persian and English called Bread and Roses, which is broadcast in Iran and the Middle East via New Channel TV.

She was the keynote speaker at Atheist Ireland’s World Atheist Convention in Dublin in 2011, and she spoke at our International Conference on Empowering Women Through Secularism in 2013.

Maryam and Atheist Ireland both share the view that we should respect and protect the rights of Muslims as people, while strongly challenging the human rights abuses imposed by Islamism on Muslims and others.

She has moved her blog from the discredited FreeThoughtBlogs network, where some bloggers focused more on smearing secular activists than challenging the threat of Islamism and other religions to human rights.

Maryam speaking at World Atheist Convention in Dublin in 2011

Maryam speaking at EWTS conference in Dublin in 2013

Maryam Namazie moves blog and launches new website
By Michael NugentPosted on May 28, 2016