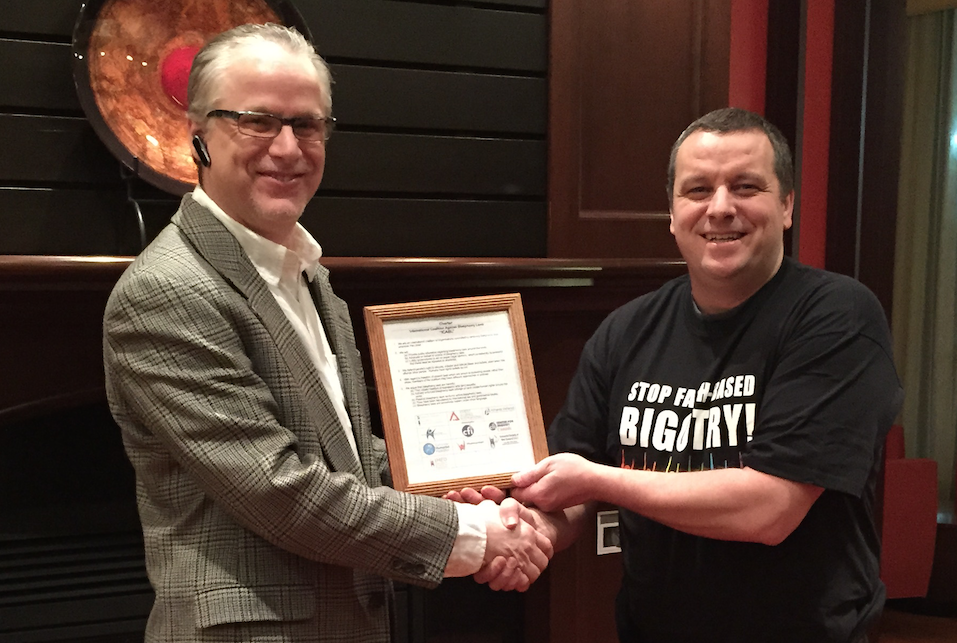 John Hamill from Atheist Ireland met yesterday in Toronto with Eric Adriaans from Centre For Inquiry Canada, to announce the charter of the new International Coalition Against Blasphemy Laws, and to discuss how both groups will work together as co-founders and partners in the campaign to end blasphemy laws.

Other partners include Atheist Alliance International, Humanist Canada, BC Humanist Association, Association humaniste du Quebec, Humanist Society of New Zealand, International Humanist and Ethical Union and a growing list of organisations around the world who have agreed to work together in the campaign to end blasphemy laws.

Eric Adriaans is the national executive director of CFI Canada, and John Hamill is the coordinator of Atheist Ireland’s blasphemy law campaign. They are pictured here with the Coalition’s charter. John is wearing a CFI tee-shirt presented to him by Eric that reads “Stop Faith-Based Bigotry.”

The charter reads as follows:

Charter of the International Coalition Against Blasphemy Laws

1. We are an international coalition of organizations committed to removing blasphemy laws wherever they exist.

2. We will:
(a)   Provide public education regarding blasphemy laws around the world.
(b)   Advocate on behalf of victims of blasphemy laws.
(c)   Lobby governments to act on expert legal opinions, which consistently recommend that these laws be repealed or abolished.

3. We defend people’s right to discuss, criticize and ridicule ideas and beliefs, even when this offends other people.  Humans have rights beliefs do not.

4. With regard to freedom of speech laws which are aimed at protecting people rather than ideas, members of the coalition may have different approaches or policies.