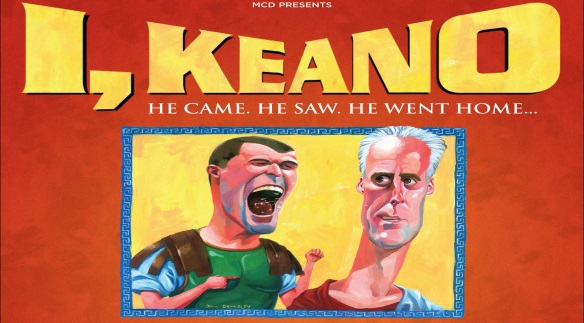 It’s now ten years since I co-wrote the comedy musical I, Keano with Arthur and Paul, and we’re bringing it back next year to celebrate Roy Keane’s return to the FAI fold.

The revival will run in the Olympia in Dublin from 28 March to 12 April 2015, with tickets going on sale this Monday from Ticketmaster outlets nationwide and online.

We were delighted with the reaction first time around, as our generation’s civil war set to music with togas caught the imagination of the nation.

To get back into the mood of I, Keano, here is a nostalgia-trip checklist of the ten silliest things the FAI did in the decades leading up to the Saipan saga.

1965 – Ireland was in a play-off against Spain to qualify for the 1966 World Cup. The FAI agreed to play the game in Paris, where there would be more Spanish fans, if the FAI could have the Spanish share of the gate money. The Spanish agreed, and won the game.

1970s – The FAI regularly organised friendlies in Poland, where some members enjoyed the ‘night life’ (yes, that means prostitutes), and once did not even stay in the same city as the match. The players travelled to one such game in the luggage carriage of a train, while the officials relaxed on seats.

1980 – After Johnny Giles quit, Eoin Hand beat Paddy Mulligan to the Ireland manager’s job by one swing vote. Afterwards, one FAI board member said that he had voted for Hand because he thought Mulligan was the person who had thrown a bun at him on an away trip.

1986 – Jack Charlton became Ireland manager by accident, after the FAI messed up a vote intended to give the job to Bob Paisley. At first Charlton got only three votes out of eighteen, compared to nine for Paisley. The FAI then couldn’t contact Charlton to tell him that he had got the job.

1986 – When a friend congratulated Charlton on his new job, he replied ‘What job?’ On being told he was Ireland manager, he replied ‘Oh, I’d forgotten about that.’ When Charlton sent his first squad list to the FAI, he found that an FAI official was adding players that he liked onto the list.

1994 – The FAI bought £296,000 of World Cup tickets, and gave most to a tout with the confidence-inspiring nickname of ‘George the Greek’, who unsurprisingly did a runner. The FAI ended up with a ‘trading shortfall’ of over £200,000, for which they obtained just 314 extra tickets for one Ireland match.

1996 – Two referees won a court case against the FAI after being downgraded for failing a new test. The judge called the FAI ‘an autocracy which was incapable of abiding by its own rules’. The FAI quickly reacted by writing to 142 other referees, banning them all from refereeing for not taking the same test – the exact opposite of the court judgment.

1999 – The FAI announced a plan to spend £65m on a new stadium, but forgot to include the £16m cost of the site, then spent years debating which of two non-existent stadiums they would use. During the optimistic FAI bid to host Euro 2008, the UEFA panel was photographed examining an empty field.

2002 – The FAI prepared for the World Cup by forgetting to bring proper footballs to an island that had no proper football pitch, causing a minor civil war back home. On returning, the FAI ordered an independent investigation into itself, and pretty much ignored the results.

2002 – The FAI tried to sell TV rights for Ireland games to the subscription channel Sky. When the Government told them that EU law protects important cultural events for terrestrial TV viewers to watch free, the FAI countered that Irish football is not culturally important.

This consistently exploding clowns’ car was the inspiration for I, Keano, which ran on and off for four years in Dublin, touring around Ireland, and in Manchester.