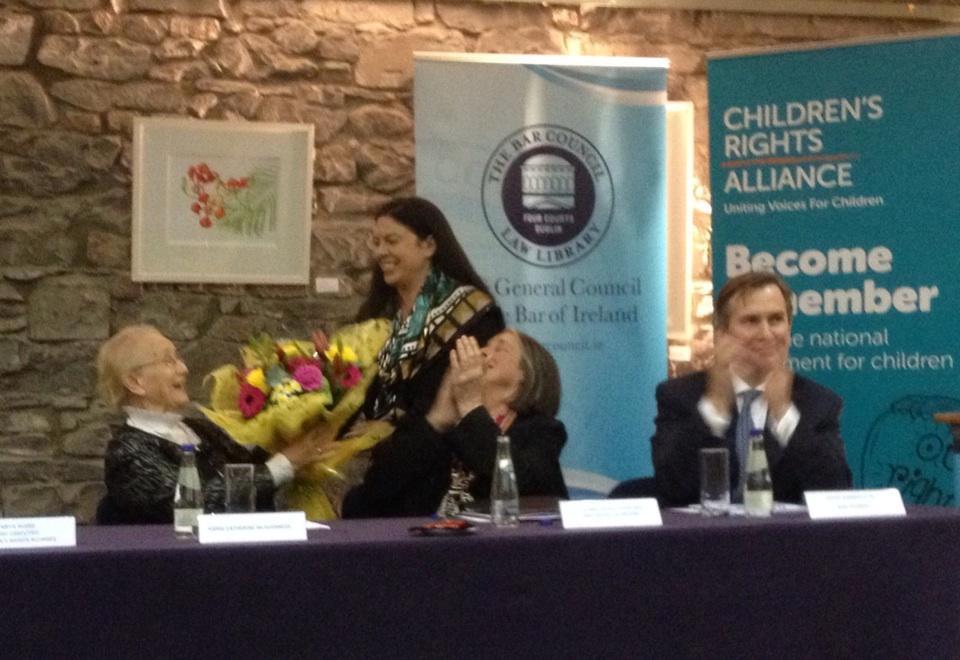 Jane Donnelly and I attended the launch of the Catherine McGuinness Fellowship on Children’s Rights and Child Law yesterday. The fellowship is a one-year position for newly qualified barristers, who will work with the Children’s Rights Alliance Legal and Policy Team.

Atheist Ireland is a member of the Children’s Rights Alliance. Our primary focus within the Alliance is promoting the right of children to secular non-denominational education, without religious discrimination in either access to schools or the school curriculum, and without discrimination against either children or staff.

At the launch of the fellowship, Chief Justice Susan Denham gave a lecture on the life and impact of Judge Catherine McGuinness. Catherine is a retired judge and activist. She is a former barrister, Senator, President of the Law Reform Commission and judge of the Circuit Court, justice of the High Court and Supreme Court of Ireland. In January 2012 she was appointed to the Council of State by President Michael D. Higgins. In May 2013 she was appointed Chair of the National University of Ireland Galway Governing Authority. She was married to broadcaster and writer Proinsias Mac Aonghusa and has three children, including Educate Together chairperson Diarmaid Mac Aonghusa who was also at the launch.

Last year Catherine was one of six members of the Council of State who called for the removal of the religious elements from the oaths that the Irish President, judges and Council of State members have to swear in order to take up office. It was a significant step for members of the Council of State to join Atheist Ireland and other advocacy groups in calling for the removal of this religious dimension, in order to allow all citizens the opportunity to take up public office without dissembling. They said that Republican forms of government based on openness, tolerance, pluralism – with an expectation that public space is truly open – tend not to add a religious dimension to the relevant oath or declaration. It is enough to commit to Res Publicae.

Announcing the launch of the fellowship, Tanya Ward, Chief Executive of the Children’s Rights Alliance said: “Judge Catherine McGuiness is undoubtedly one of Ireland’s greatest children’s champions. In her time as a Judge of the Circuit, High and Supreme Courts she was a constant voice for fairness and equality. To this day she remains a vital force in Irish Society, ensuring that rights are upheld and fair procedures are followed. We are honoured that she is willing to allow our fellowship to be named after her.”

David Barniville SC, Chairman of the Bar Council, said: “The Bar Council is very proud to support this Fellowship which will continue the great and inspirational work that Catherine McGuinness has done in this area. We are delighted to be associated with this initiative and look forward to working closely in its development” said.

You can get more information about the fellowship here.