I have just had the following discussion on Twitter with Latsot, an occasional guest blogger on FreeThought Blogs and one of the gentlemen who have falsely accused me of defending rapists. It illustrates the difficulty of communicating reasonably with the people making these false allegations.

The smear was initiated by PZ Myers, a cofounder of FreeThought Blogs, who has repeatedly failed to substantiate his allegation that I defend and provide a haven for rapists and that the evidence for this is that some people who post on another website also comment on my blog.

For context, here is a previous conversation that I had with Latsot, during which he withdrew and apologised for making the allegation, before later repeating the allegation and describing his own apology as a not-pology. Latsot then declined to discuss his withdrawal of his apology on Twitter, saying that he would answer questions about it on his blog.

The background to today’s conversation

The background to today’s conversation with Latsot is the following exchange that I had on Friday with Martin, an occasional FreeThought Blogs commenter who I have met at conferences and found to be reasonable person. I have since talked to Martin about this exchange by direct message, and I intend to continue that discussion, so I don’t want to discuss it further here other than to record it as the basis of today’s discussion with Latsot.

Martin – I asked people more intimately involved about the source of the allegations. I’m sure you shelter rape apologists, maybe worse.

Me – So you are joining in? For the record, please withdraw and apologise for alleging I shelter rape apologists and maybe worse. Either that, or please substantiate it, including clarifying what you mean by ‘sheltering’, ‘rape apologist’ and ‘maybe worse’.

Martin – Let me be very precise. Rape apologists have been allowed to post on your blog as far as I can see. And I take offense with that

Me – So is ‘allowed to post on my blog’ what you mean by ‘shelter’? Also, what do you mean by ‘rape apologists’ and ‘maybe worse’?

Martin – Next time you talk about Christianity on the radio, please include questions “what do you mean by resurrection”, “crucifiction”.

Me – So are you declining to substantiate your smear, by distracting attention to something else? I’m used to that by now.

Martin – actually, no, I just give up, shake my head and go to watch the Cricket

Me – Accusing someone of sheltering rape apologists or worse, then going to watch cricket when challenged, is trivialising rape.

Today Latsot joined in the above discussion by tweeting six times to me about it. If you check the latter part of the conversation on either my or Latsot’s Twitter feeds, you will also see other people commenting. I want to leave this recording to stand on its own, so that readers here can form their own opinion of what is being said.

Latsot (to me, over six tweets) – That’s complete nonsense. People can respond or not, regardless of your agenda without trivialising the subject. Seriously, Michael, think about what you just said. It’s you all over. You think think everyone should take your concerns seriously at the same time you’re belittling the concerns of others. But holy fuck, pointing out some behaviour then having better things to do but argue with you is totally fine and says nothing at all about anyone’s attitrude toward the subject at hand. perhpas accusing people of trivialising rape because they don’t want to talk about your sads is trivialising rape.

Me – You’ve just tweeted me six times after saying you don’t want to communicate with me on Twitter. Do you want me to reply?

Latsot – I said that if you want to communicate with me on a specific point, I’d prefer you do it via my blog. In my recent tweets I was defending a friend against your silliness in the only way available. By all means reply on this specific point.

Me – I’m still not clear. Martin and I were discussing the same point you say you don’t want to talk to me about here.

Latsot – No, the point I was discussing was your idiotic one about Martin

Latsot – I never said that I wouldn’t discuss any point with you, Michael, as you know perfectly well. I invited you to discuss one point on my blog rather than here. But I consider them different points. I’ll describe why so there’s no more confusion.

Me – Please do. Do you want to describe the difference here or on your blog?

Latsot – Suit yourself. If you do it here, this time I’ll record all the hatred I get from your supporters.

Me – What do you mean, if *I* do it here? I asked what *you* wanted to do. I’m trying to suit your ambiguously stated preferences.

Me – How do you get to decide what I get to decide? Also, I said the comment, not the person, was trivialising rape. And it was.

Latsot – I’m not the one doing the deciding, you are. I fail to see how someone not wanting to talk to you anymore is trivialising rape.

Me – Not wanting to talk to me isn’t trivialising rape. Alleging I defend rape apologists then saying you want to watch cricket is.

Latsot – Why? How is that POSSIBLY trivialising rape?

I am copying the above few tweets here, in which you will notice that I have answered Latsot’s question. The significance of this otherwise unremarkable exchange will become clearer later. 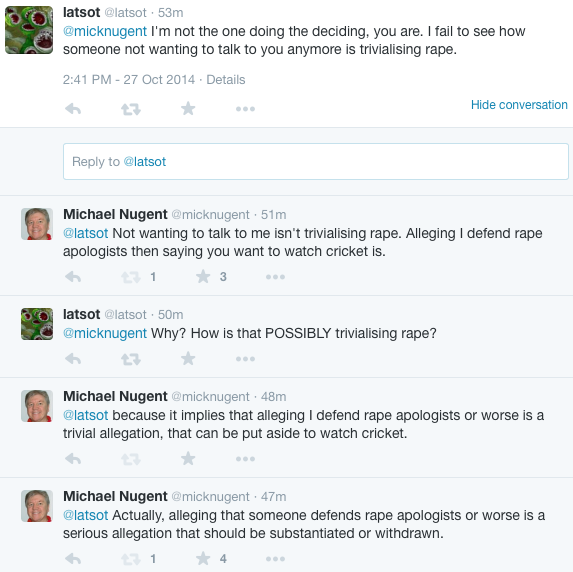 Back to the conversation

Latsot – Try to stick to the argument. This is possibly why people get sick of talking to you in the first place.

Me – For example, if I accused you of defending murderers then said I was going to watch cricket, that would be trivialising murder.

Latsot – That doesn’t explain anything, it’s just repeating your bizarre assertion using a different crime. Its not an example.

Me – What? You asked me a specific question, and I directly answered that question. How is that not ‘sticking to the argument’?

Latsot – No, you went back to your complaint about people accusing you. The discussion is about whether that trivialises the object.

Latsot – But you refuse to explain why it trivialises rape. You just keep asserting it does with absolutely no argument. perhpas accusing people of trivialising rape because they don’t want to talk about your sads is trivialising rape. in this specific case someone wanted to watch cricket rather than continue the conversation. THAT is what I am asking you to defend.

Me – You describe it as conversation. Actually, it was a serious allegation made against me, that should be substantiated or withdrawn. So you are asking me to defend something that didn’t happen, based on your invented version of what you say happened?

Latsot – No, I’m asking you to explain your original complaint. You said someone refusing to engage with you trivialised rape.

Me – For the umpteenth time, no I didn’t. Continuing to misrepresent me doesn’t make your misrepresentation true.

Latsot – So answer the question

Me – Again? How many times do you need it answered?

Latsot – OK, could I start again on the question I want you to answer? Will you take that seriously?

Me – Of course. And I always take you seriously.

Latsot – OK, it might take a couple of tweets. You said that a person accused you of something then later decided not to talk to you about it. Is that accurate? yes or no? I mean, is that an accurate description of what you said?

Me – It is partly, but not completely, accurate. Why not just quote the tweets instead of paraphrasing them? Then it would be accurate.

Me – Because I don’t think you know what I originally said. You seem to be misremembering what you think you read.

Latsot – “Accusing someone of sheltering rape apologists or worse, then going to watch cricket when challenged, is trivialising rape.”

Latsot – I know. So explain why that’s true.

Me – Okay. Like you, I will do it in stages. Do you agree that “sheltering rape apologists or worse” is a serious allegation?

Latsot – It rather depends, but as a hypothetical I agree it could be.

Me – Do you think in this instance it is a serious allegation?

Latsot – What has that to do with your argument? I will agree hypotheticaly that it is, for the sake of argument.

Me – We are talking about an actual allegation. It is not hypothetical. Do you think in this instance it is a serious allegation?

Latsot – Oh for fuck’s sake, MIchael. You could surely use a hypothetical example to prove you’re right. Why won’t you?

Me – Because I don’t need to use a hypothetical example. We are discussing the actual real-life allegation that actually happened.

Latsot – So since we’re at am impasse, let’s talk hypotheticals for now and get down to specifics later. YES. WE ARE. We’re talking about your idiotic assertion that someone not responding to you is trivialising rape. Which you continue to fail to defend. You agree you said it, but you won’t explain your reasoning.

Latsot – Then answer my question. You haven’t offered any reasoning at all. You just asserted. We aren’t getting anywhere because you won’t answer a simple question you’ve been asked many times. I bet by the time you get this tweet you’re halfway through asking what that question is.

Me – I’ve answered it many times. You asked to start again. I agreed. I am trying to explain it based on your assumptions, so I am trying to discover if you think it is a serious allegation to accuse me of sheltering rape apologists or worse.

Latsot – I know you are. You’re obsessed with yourself, we know that. But answer the question nevertheless. No Michael. You haven’t explained why someone calling you a rape apologist then going away trivialises rape. DO SO.

Me – Because that is not what I am saying. And you’ve also rephrased his allegation from sheltering rape apologists to being one. Try to avoid the insults. They don’t help. You can be reasonable when you want to be, then you drop in casual insults.

Me – At this stage I really don’t know whether or not you are trolling. I hope you are not, because you can be reasonable, but you must have noticed how many times I have answered your question.

Me – Here’s the first time I answered you, about an hour ago.

Me – You have been claiming for a while now that I didn’t answer your question. Now that I show you that I did, you just laugh?

Latsot – Mick, you might be wrong about some stuff. You don’t think you want to examine yourself. Note that’s not a question. What answer? Show us all your answer. The internet awaits.

Me – I’m now pretty close to concluding that you’re trolling. I’ll keep that in mind when responding to your own allegation about me.

Despite the fact that Latsot actually responded to the tweet in which I included a screenshot of my previous answer to his question, thus indicating that he has read my answer and therefore knows that it exists, Latsot has since tweeted the following:

My Twitter conversation today with Latsot, who like PZ Myers has falsely accused me of defending rapists
By Michael NugentPosted on October 27, 2014October 28, 2014

108 thoughts on “My Twitter conversation today with Latsot, who like PZ Myers has falsely accused me of defending rapists”