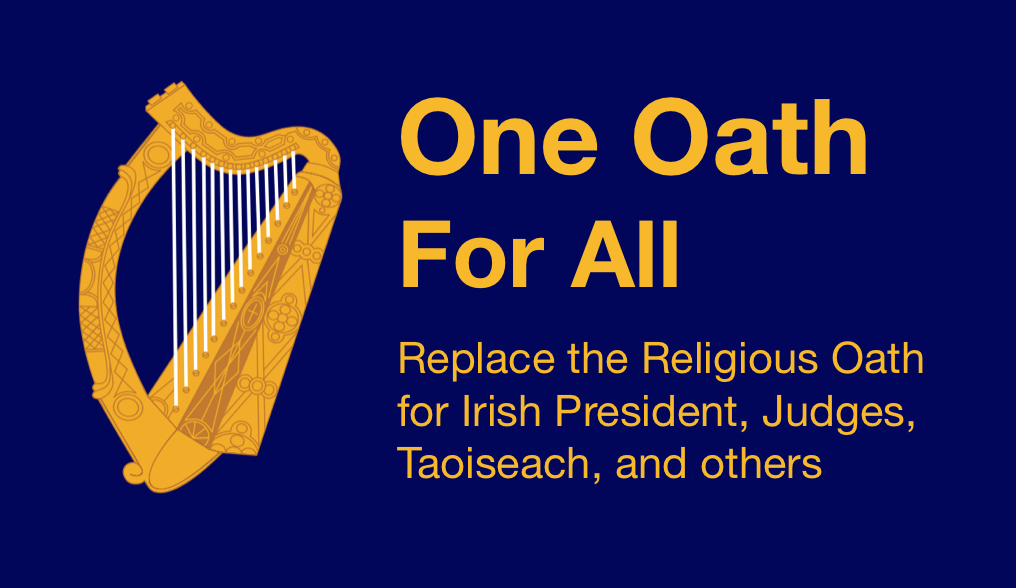 Atheist Ireland is today launching our ‘One Oath For All’ campaign, to enable conscientious atheists to hold the office of President, Judge, Taoiseach, or other members of the Council of State.

Today Michael D Higgins will begin his second term as President, after fourteen elections or uncontested nominations since 1938, all of which have excluded conscientious atheists as candidates.

This is because, in order to take office as President, Judge, or Taoiseach, we would have to swear a religious oath that would force us to dissemble about our beliefs, and breach our human right to freedom of conscience and belief.

We want a referendum to replace these religiously discriminatory oaths from our Constitution, so that all citizens of our Republic can be treated equally regardless of their religious or nonreligious beliefs.

These public office-holders should instead make a single declaration of loyalty to the Irish Constitution, State, and people, that does not reveal anything about the person’s religious or nonreligious beliefs.

The Religious Oath that the President must swear today

The oath that the President must swear is contained in the Constitution (Article 12):

“In the presence of Almighty God, I do solemnly and sincerely promise and declare that I will maintain the Constitution of Ireland and uphold its laws, that I will fulfil my duties faithfully and conscientiously in accordance with the Constitution and the law, and that I will dedicate my abilities to the service and welfare of the people of Ireland. May God direct and sustain me.”

While it is described as a declaration, it is clearly a religious oath. It is a solemn promise, invoking a divine witness described as Almighty God, regarding the President’s future action or behaviour, and asking Almighty God to direct and sustain him or her.

If instead, in order to become President, the Constitution required that a winning candidate had to swear that there is no God, everybody would immediately realise that this would be a breach of their rights. But there is a blind spot when the discrimination is the other way around.

Other Religious Oaths in the Constitution

A similar religious oath exists for Judges (Article 34) and members of the Council of State (Article 34).

The Council of State includes the Taoiseach, Tanaiste, Chairs of the Dail and Seanad, Chief Justice, Presidents of the High Court and Court of Appeal, Attorney General, former Presidents, former Taoisigh, former Chief Justices, and seven nominees of the President.

It is clear from the Preamble that the ‘Almighty God’ involved is the Christian God, explicitly naming ‘the Most Holy Trinity’ and ‘our Divine Lord, Jesus Christ.’ The preamble begins:

“In the Name of the Most Holy Trinity, from Whom is all authority and to Whom, as our final end, all actions both of men and states must be referred, We, the people of Éire, Humbly acknowledging all our obligations to our Divine Lord, Jesus Christ…”

“The State acknowledges that the homage of public worship is due to Almighty God.”

Our Constitution should acknowledge the important right to freedom of religion or belief of every citizen, regardless of whether those beliefs are religious or philosophical. But the Constitution of a Republic should not give preference or privilege to the beliefs of either religious or atheist citizens.

The UN Human Rights Committee concluded, regarding the religious oaths:

“Religious Oaths: The Human Rights Committee is concerned at the slow pace of progress in amending the Constitutional provisions that oblige individuals wishing to take up senior public office positions such as President, members of the Council of State and members of the judiciary to take religious oaths.

Ireland should amend articles 12, 31 and 34 of the Constitution that require religious oaths to take up senior public office positions, taking into account the Committee’s general comment No. 22 (1993) concerning the right not to be compelled to reveal one’s thoughts or adherence to a religion or belief in public.”

In 2013, six members of President Higgins’ Council of State called for the removal of the religious elements from the oaths that the Irish President, judges and Council of State members have to swear in order to take up office. They were Catherine McGuinness, Michael Farrell, Sally Mulready, Ruairi McKiernan, Deirdre Heenan, and Gerard Quinn, acting in their individual capacities.

They said that the issue came to their attention at the first meeting of the Council of State under President Higgins. At that meeting, Tanaiste Eamon Gilmore had to swear the religious oath, despite being publicly on record as saying that he does not believe in God. He said that he had taken legal advice and that he had a constitutional obligation to swear the oath. Atheist Ireland had raised this issue with the Tanaiste before this meeting.

They said that the oaths could exclude or cause embarrassment to atheists, agnostics and humanists. They could also be unacceptable to Quakers and other Christians who do not approve of religious oaths, and to members of some other non-Christian faiths. They said that Republican forms of government based on openness, tolerance, pluralism – with an expectation that public space is truly open – tend not to add a religious dimension to the relevant oath or declaration. It is enough to commit to Res Publicae.

Support the ‘One Oath For All’ campaign

Please support the ‘One Oath For All’ campaign, to enable conscientious atheists to hold the office of President, Judge, Taoiseach, or other members of the Council of State.

We want a referendum to replace these religiously discriminatory oaths from our Constitution, so that all citizens can be treated equally regardless of their religious or nonreligious beliefs.

These public office-holders should instead make a single declaration of loyalty to the Irish Constitution, State, and people, that does not reveal anything about the person’s religious or nonreligious beliefs.

Atheist Ireland launches ‘One Oath For All’ campaign
By Michael NugentPosted on November 11, 2018January 30, 2019