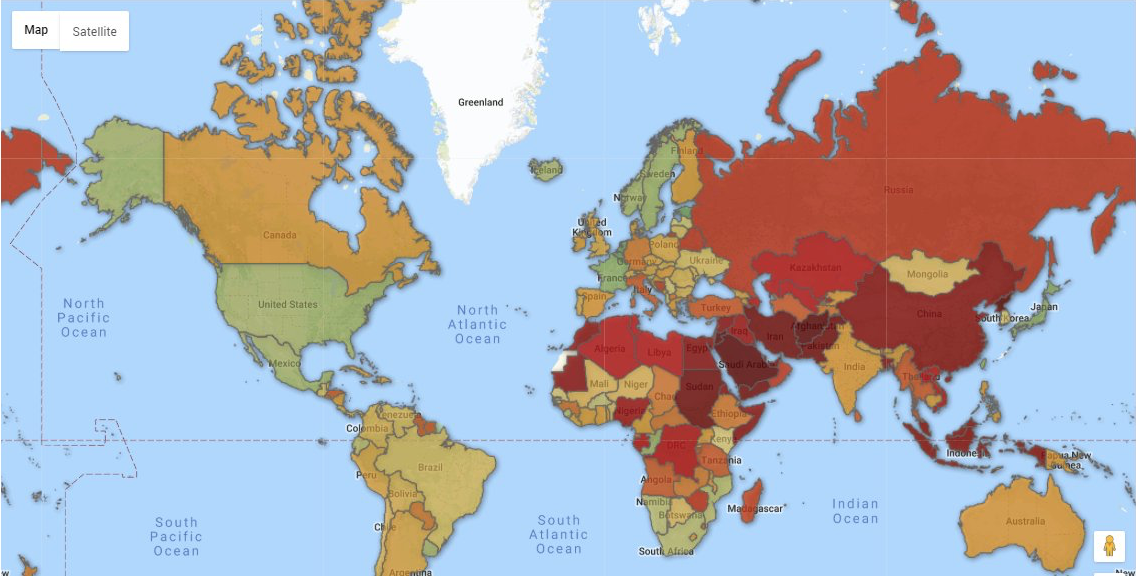 The IHEU Freedom of Thought Report 2018 ranks the best and worst countries in the world to be an atheist, based on restrictions or discrimination in four areas: constitution and government; education and children’s rights; family, community and society; and freedom of expression.

The IHEU is the International Humanist and Ethical Union. Atheist Ireland is a member, and we contributed to the analysis of Ireland in the Report.

The report concludes that the three best countries in which to be an atheist are Belgium, the Netherlands, and Taiwan. The four next best are France, Japan, and the small island States of Nauru and Sao Tome/Principe.

The three worst countries in which to be an atheist are Saudi Arabia, Afghanistan, and Pakistan. The four next worst are Iran, Maldives, the United Arab Emirates, and Mauritania.

Ireland ranks at 115th out of 196 countries, although we should move up the rankings when our blasphemy law is repealed following last Friday’s referendum.

The three best countries are Belgium, the Netherlands, and Taiwan, in which atheists face no substantial restrictions or discrimination. These three States are secular, with separation of political and religious authorities; there is no formal discrimination in education; secular groups operate freely and there are no religious courts or tribunals; and there are no fundamental restrictions on freedom of expression or advocacy of humanist values.

The next four best countries are France, Japan, Nauru and Sao Tome/Principe. Atheists have almost all of the same freedoms and rights that atheists in the top three countries have. France is a secular State but it has some local or provincial exceptions to that policy; and Japan, Nauru and Sao Tome/Principe, which have some concerns about political or media freedoms that are not specific to the nonreligious.

Grave violations – worst seven countries in which to be an atheist

The worst three countries are Saudi Arabia, Afghanistan, and Pakistan. In these countries, legislation is largely or entirely derived from religious law or by religious authorities; religious or ideological indoctrination is pervasive in schools; government figures or state agencies openly marginalise, harass, or incite hatred or violence against the non-religious; and expression of core Humanist principles on democracy, freedom and human rights is repressed.

The next four worst countries are Iran, Maldives, United Arab Emirates, and Mauritania. These have all of the same human rights abuses against atheists that the worst three have in constitution and government; family, community and society; and freedom of expression. Schools are marginally less repressive, but religious or ideological instruction is still mandatory in all, most, or some state-funded schools, with no secular or humanist alternative.

Ireland ranks at 115th out of 196 countries, although we should move up the rankings when the blasphemy law is repealed following last Friday’s referendum. The rankings can be misleading: while Ireland is in the bottom half of the countries, Saudi Arabia at the bottom is twenty times as bad as Ireland in terms of the scale of the violations of the rights of atheists.

Here is how the report ranks Ireland: Under constitution and government, there is systematic religious privilege and preferential treatment given to religion. Under education, the State funds religious bodies to run most of our schools and allows them to discriminate on the ground of religion. Under family and community, religious groups control some public or social services; and under freedom of expression, the blasphemy law still has to be formally repealed and the constitutional ban was still in place when the report was compiled.

Commentary from IHEU and Atheist Ireland

Andrew Copson, President of the IHEU, said of the report:

“This is a world’s first. For the first time our report will show, with authority and accuracy, the discrimination faced by people around the world because of their non-religious beliefs. This report paints a dark picture, with significant discrimination faced by our non-religious friends and colleagues around the world. At a time of growing nationalism, we continue to see those who are brave enough to criticise and critique conservative religious leaders demonised as ‘unpatriotic’ and ‘subversive’.”

Bob Churchill, Editor of the report, said of the worst-performing countries:

“In Ireland the non-religious are now the second largest group in Society after Roman Catholics, but still face religious discrimination. The Irish Constitution begins with ‘In the name of the Most Holy Trinity’ and Catholic social policy is reflected in many of our laws. The Catholic Church in Ireland controls the vast majority of publicly funded schools, which have exemptions from equality laws. A religious oath is required to take up the office of President, or to become a Judge, or to be Taoiseach (Prime Minister), or to hold a number of other high public offices. In 2010 Ireland introduced a new blasphemy law. In recent years, ten different UN and Council of Europe reports have told Ireland that it is infringing on the human rights of atheists, agnostics and minority faith members. It is time for Ireland to realise that it must comply with its human rights obligations and ensure that all citizens have equal rights regardless of their religious or philosophical convictions.”

These rankings place a heavy emphasis on formal or legal discrimination, as it was not possible to produce a full, qualitative assessment of societal factors or personal experience in every country.