Senator Ronan Mullen voted against the Irish blasphemy law in 2009, despite denying that he did so on Prime Time yesterday.

He opposed the blasphemy law because it did not explicitly allow religious people to blaspheme against matters held sacred by other religions.

He added: ‘I say this as someone who worked for five and a half years as press officer for the Catholic diocese of Dublin so I know a little about what I am saying.’

You can read the Oireachtas debate here.

Senator Mullen also suggested on Prime Time that we should advise Pakistan to use our blasphemy law. He is clearly unaware that Pakistan (on behalf of the Islamic States) has been doing precisely that at the United Nations.

The Islamic States have proposed that wording from our law should be used throughout the United Nations, in order to embarrass Ireland and Western States that are trying to stop repressive regimes from using blasphemy laws to persecute Christians, Ahmadi Muslims, atheists, and members of minority religions.

You can read more about that here.

Here are extracts from Senator Mullen’s contribution to the Oireachtas debate in 2009. While he accepted the Minister’s argument that he had a constitutional obligation to pass the law, and he agreed with the arguments against holding a refeferendum, he also said the following:

For whatever reason the Minister has deemed it necessary to buttress the requirement of intentionality with further protection where people can show that a reasonable person would find genuine literary, artistic, political, scientific or academic value in the matter which is alleged to be blasphemous.

Unaccountably, however, the Minister has omitted the possibility that a reasonable person would find genuine religious value in the matter to which the offence relates. Here lies the great irony: in legislation which is designed to offer some protection to people of whatever faith, the Minister has included a bulwark against that protection to every category imaginable except the person of faith, despite the fact that it is most likely to be in matters of religion, through utterances of people of religion, including ministers or officials of religion, that the offence might be given.

Let us take for example the Reverend Ian Paisley, who I am sure would have no problem saying the Catholic doctrine of the real presence is nonsense on stilts. While that may not be the most sympathetic example, given Reverend Paisley’s particular personality, there is no protection for him in this legislation although there should be.

If the Minister is offering protection to Mr. Richard Dawkins who in his artistic work of literary merit knocks the socks off the belief of papists, Muslims, Buddhists or anybody else who holds some class deity in high esteem, he should then extend the same protection to a minister of religion. It is in debates between religions that controversy is most likely to arise.

What I find hard to understand is this. The former Taoiseach, Deputy Bertie Ahern, established a forum for dialogue between the State and religious and ethical bodies, including non-confessional bodies such as the Humanist Association.

The legislation as it stands exemplifies in a classic way the anti-religious dimension that forms part of aggressive secularism which often arises in our society, namely, that there is to be protection for every group except those with faith. That is intolerance, not tolerance, and it must be addressed.

A mistake has been made here, a mistake that will cause offence to people of faith of different religions and denominations. The Minister has correctly provided that a reasonable person would have to show that he or she could find genuine literary, artistic, political, scientific or academic value in the matter alleged to have caused offence. The reasonable person does not have to believe in the concept, he just must see genuine merit in it. I could say I did not like a particular episode of “Father Ted” but it has genuine artistic value.

The problem is that there are religious concepts and matters of controversy between religions where one cannot claim the necessary protection — I say this as someone who worked for five and a half years as press officer for the Catholic diocese of Dublin so I know a little about what I am saying — because one does not come under the heading of having literary, artistic, political, scientific or academic merit.

The Minister is rightly tabling these amendments to allay fears that this anti-blasphemy legislation would be used in a way that would be oppressive of the free expression of ideas. I applaud him for that. An American writer described anti-Catholicism as the last acceptable prejudice but we are not talking about that here because this applies not only to Catholics.

We must not make the mistake of thinking that the only people who are not entitled to protection in society are people with religious views. That is what will happen when we extend a protection for free speech for people who produce material or express ideas in which a person might find genuine literary, artistic, political, scientific or academic merit while excluding the possibility of there being a religious value.

A person does not have to share a view to see it could have religious value. If I want to cause a debate as a religious commentator or polemicist and I say that what the prophet Mohammed said in the Koran is not conducive to the common good because it could be read in a violent way, I need protection in the expression of that view although it is not a political view. If I say that the Koran leads people away from God, that is a religious view, it is not political, scientific, academic or literary but the protection is still deserved.

When it came to the final vote, Senator Mullen tried to propose an amendment but was ruled out of order.

He then voted against the motion: ‘That the Bill do now pass’. 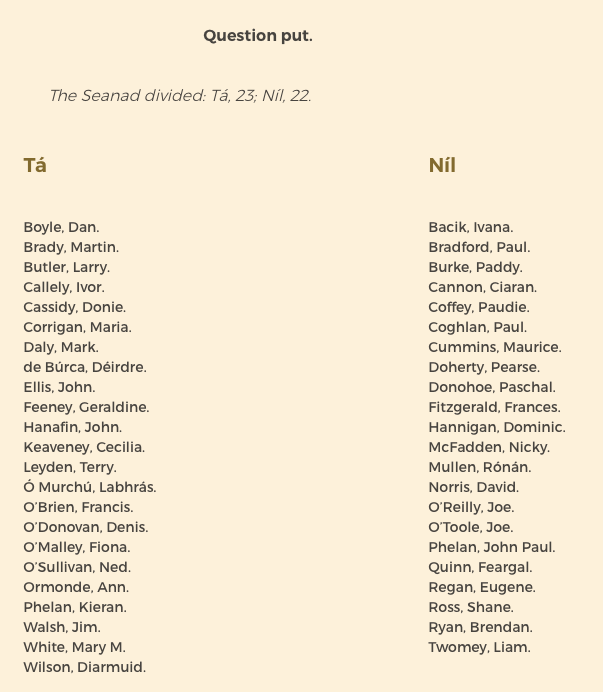 You can read the full debate here.