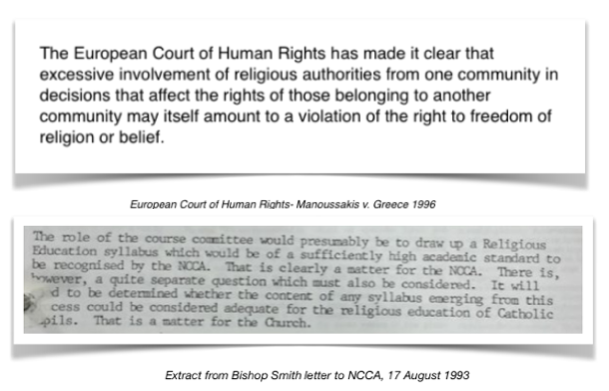 Atheist Ireland today launched a major report on how the State Religious  Education course at second level breaches human  and Constitutional rights. It is one of our most comprehensive projects to date.

In recent months, Atheist Ireland has researched hundreds of documents obtained under the Freedom of Information Act from the NCCA (National Council for Curriculum and Assessment) about how it devised the State Religious Education course. This research supports the case that Atheist Ireland has been making for years:

In practice, what happens in most secondary schools is this:

This issue came to public attention last November, when Atheist Ireland put parent Paul Drury in touch with RTE, after Castletroy Community College refused to permit his daughter to opt out from their combined religion class. The school eventually allowed her to opt out, but insisted that she stay in the classroom while religion was taught. They did not offer her another subject, which she should be entitled to as she can legally opt out of the patron’s religious course, and the State course is optional so she should have been able to pick another subject.

Based on this research, Atheist Ireland is making five recommendations.

1. The Minister for Education should immediately issue a Circular Letter informing all schools at second level that:

2. The Minister for Education is proposing a new Education (Admission to Schools) Bill. This Bill should be amended to ensure that:

3. The NCCA is scheduled to review the State Religious Education Course at second level later this year. The Minister for Education should instruct that:

4. The Minister for Education should ensure that students from minority backgrounds can have access to teacher training, and have access to the teaching profession, without having to teach Catholic Religious Instruction and Formation.

5. The Minister for Education should urgently remove all religious discrimination in the education system:

Sample extracts from the Report 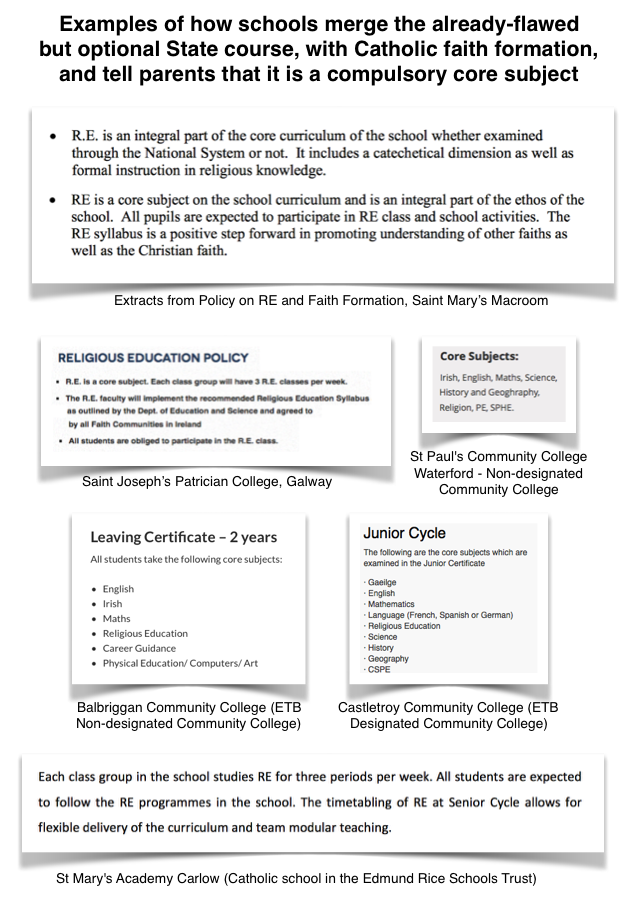 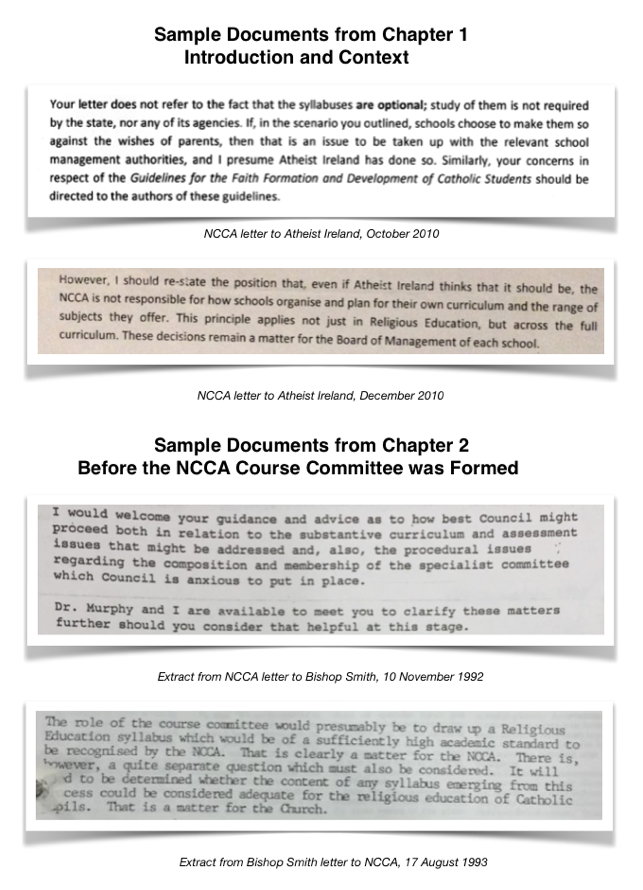 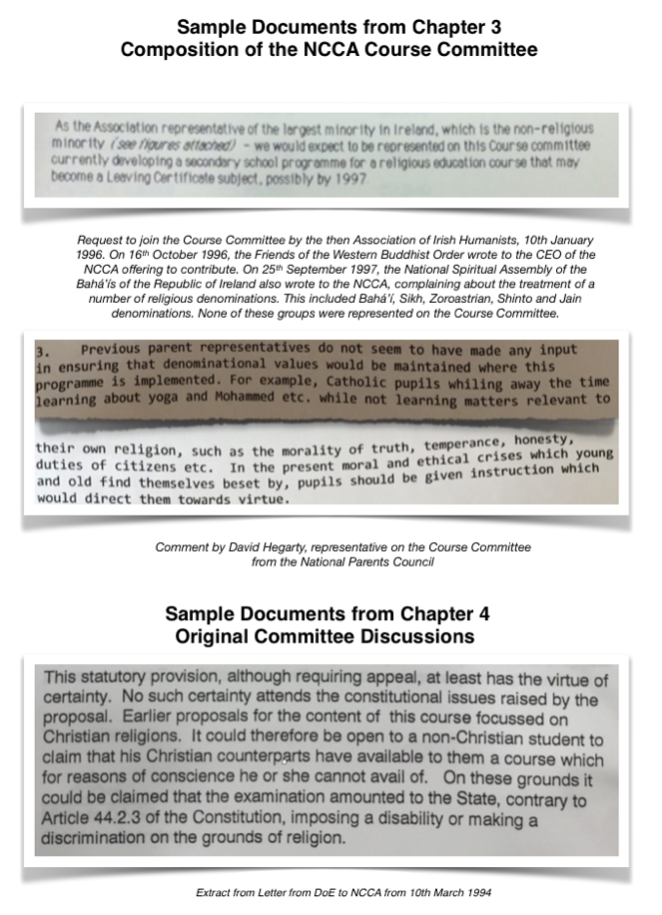 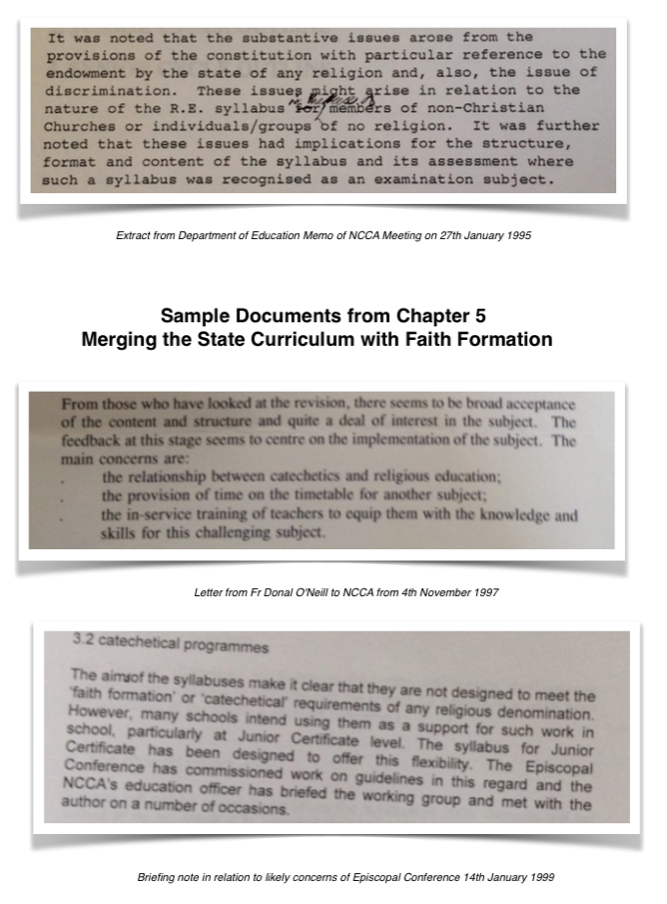 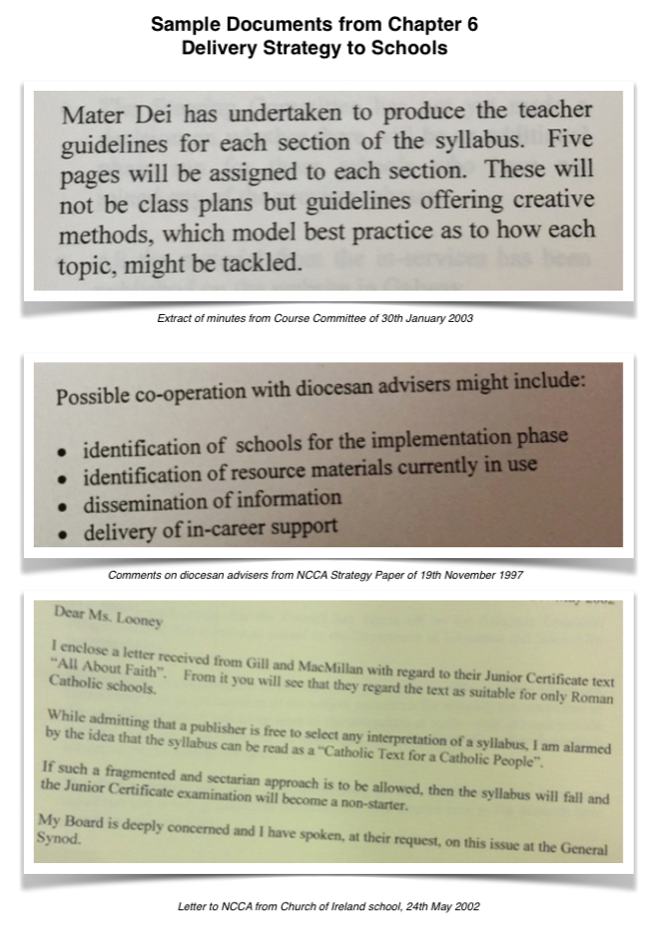 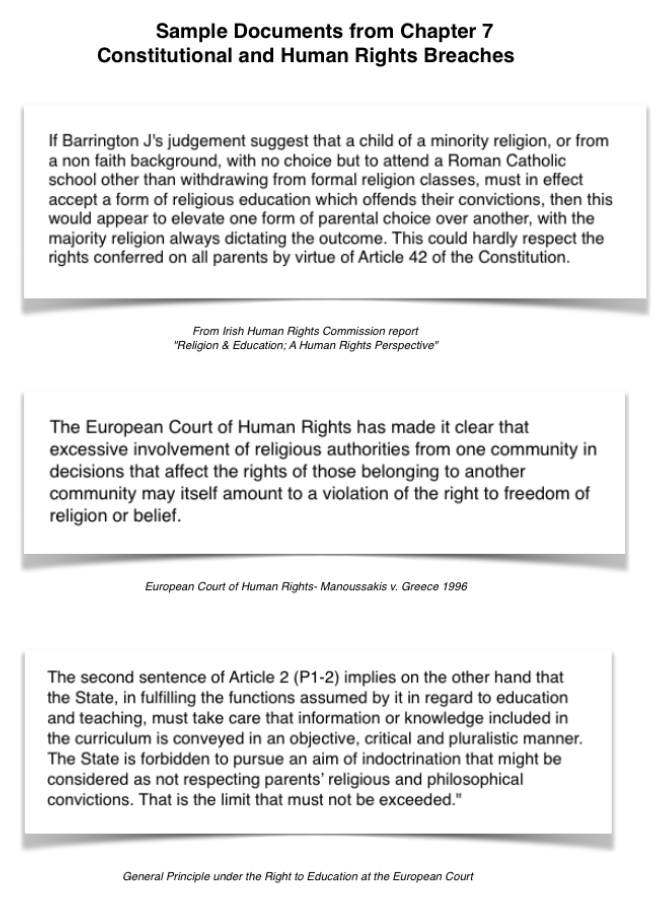 How the Catholic Church Controls the State Course

1. The Catholic Church has had undue influence in the formation of the course by the NCCA, while other religious and non religious perspectives were marginalised. This report by Atheist Ireland shows how that happened.

2. The Catholic Church controls how the State Religious Education course is delivered in nearly all schools and colleges, as it is combined with Catholic Religious Instruction and faith formation.

“Under the terms of circular-1979 the VEC schools were able to provide permanent posts for qualified RE teachers and were asked to provide two hours of religious education per week to each class. While the structures have changed and we now have ETBs (Education Training Boards) rather than VECs, the same basic principles still apply and, where they are implemented, parents can send their children to ETB schools with confidence that the school will play its part in the faith education of their children. Once again, it is important that parents inform themselves as to what arrangements are actually in place for Religious Education in whatever school they choose for their children.”

The NCCA devised and rolled out the State Second Level Religious Education course in the 1990s and 2000s, before and after the Education Act 1998. Atheist Ireland was not founded at that time, so we had no influence on the process. If Atheist Ireland had been in existence, there is no doubt that the NCCA would have sought to marginalise us in the same way as they marginalised Baha’is, Buddhists, Humanists and others who sought to have an input. We would have strongly resisted this marginalisation.

The hundreds of documents that Atheist Ireland has now obtained show that the NCCA and the Department of Education knew about their legal duty to not discriminate on the ground of religion, and their obligations to respect all parents’ convictions under the Constitution. However, the NCCA gave the Catholic Church too much deference and influence, it excluded representatives of non-Christian beliefs, it gave Catholic Diocesan Advisors a formal role in delivering the course, and it ignored clear warning signs that schools would merge the State course with the schools’ own Catholic Religious Instruction.

The NCCA will be revising this State Religious Education course later this year. It is important that it be amended to reverse these problems and to meet human rights standards.

The NCCA is now preparing a similar course for primary schools called Education about Religions, Beliefs and Ethics. Since we were founded in 2008, Atheist Ireland has been actively lobbying for a human rights based State course:

Atheist Ireland has raised this issue directly with the Taoiseach, the Minister for Education and the NCCA.

The NCCA is approaching the new Primary Level course in a more impartial way than it did twenty years ago. Under Section 42.1c of the Irish Human Rights & Equality Commission Act 2014, it is obliged to protect the human rights of its members, staff and the persons to whom it provides services. This is significant for the State courses at both Primary and Second Level, because it means that today’s Second Level State course does not meet the human rights standards that the NCCA is using today, in devising the new Primary Level State course.

However, even the new Primary Level course will still breach constitutional and human rights, unless there are changes in the Education Act 1998 to ensure that it is delivered in an objective, critical and pluralistic manner, which is out of the control of the NCCA. The Irish Human Rights and Equality Commission has made recommendations to amend the Education Act 1998, in order to bring it into line with the European Convention.

The Report deals in detail with the constitutional and human rights breaches involved in this course.

Atheist Ireland has a policy called the Schools Equality PACT (an acronym for Patronage, Access, Curriculum and Teaching) that outlines the legal changes needed. Bizarrely, the Irish State claims it is constitutionally obliged to allow State-funded schools to discriminate against parents and children in this way. This report will help Atheist Ireland to focus attention on these breaches of human and constitutional rights at second level schools.