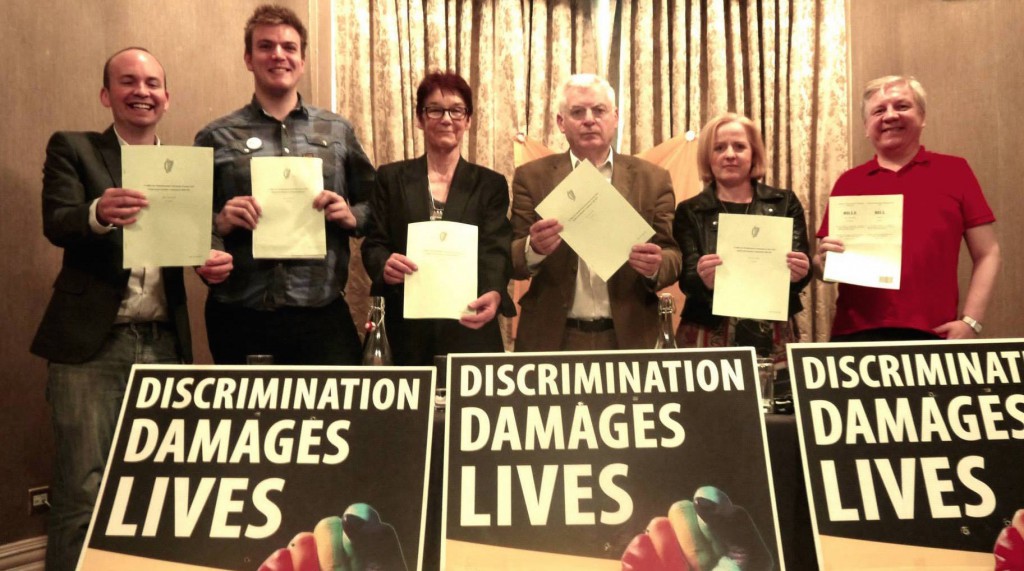 I spoke yesterday at the launch of a new Bill, proposed by the Anti-Austerity Alliance, to amend the Employment Equality Act to stop religious schools and hospitals from discriminating against LGBTQ and atheist teachers and other staff. The Bill has the support of a wide number of groups, including the Gay and Lesbian Equality Network, the ASTI, the INTO, the TUI, Atheist Ireland, LGBT Noise and ICTU Youth.

Atheist Ireland welcomes this Bill as an important step towards a secular Ireland where the State remains neutral between religion and atheism. When we were in Geneva last week briefing the UN committee on ESC rights about this and other issues, the chair of the UN committee compared Ireland to a developing country with regard to our lack of separation of church and state.

We also welcome the Government’s announcement that it will not oppose today’s vote to bring the Bill forward to committee stage, where it can be discussed in more detail. Deputies Paul Murphy and Ruth Coppinger introduced the Bill in the Dail yesterday, and the ROSA group is holding a public demonstration outside the Dail at 6pm today when the debate continues.

Section 37 of the Employment Equality Act gives an exemption to religiously run schools and hospitals, allowing them to discriminate against employees on the ground of religion in order to protect their religious ethos.

This new Bill would allow churches to discriminate on the ground of religion where there is a justified occupational requirement, for example insisting that a priest must be Catholic. But it would not allow churches, or religiously run bodies, to discriminate against employees while providing services including schools or hospitals.

The Minister for Education and the Minister of State for Equality have both said that removing discrimination against atheists would be unconstitutional. Atheist Ireland disputes this, but if it is correct, then it is a breach of Ireland’s human rights obligations.

The Government should either support this Bill and let the courts test its constitutionality if that is necessary, or else they should call a referendum to remove this and all of the other religious discrimination that flows from our 1937 Constitution.

Paul Murphy introduced the Bill in the Dail yesterday by saying that the marriage equality referendum was a powerful blow against discrimination, inequality and homophobia. He said the traditional picture of a socially conservative majority in society is fundamentally incorrect. He said that immense social change has taken place, and that this of itself becomes a pressure point for more change and progress. He added:

“We know that discrimination, inequality and homophobia persist. While legal change cannot change all that in one fell swoop, it can send a signal that homophobia is not acceptable, as opposed to being enshrined in law. The ban on blood donations from gay and bisexual men continues. It must be ended. We need gender recognition legislation that takes into account all the criticisms made by transgender people, including those under 18 years of age. We need this to be passed into law as soon as possible.

In particular, and this is what this Bill from the Anti-Austerity Alliance is about, we need to end the incredible situation whereby church-run schools, hospitals or charitable institutions can discriminate against LGBTQ people, atheists, unmarried mothers, divorced people, minority faiths and others. Now is clearly the time to end all legal discrimination as a step towards real equality and a progressive secular State with separation of church and State.

The infamous section 37 of the Employment Equality Act that we are trying to remove is particularly offensive. It functions as an exemption to the employment equality legislation. It allows a religious, educational or medical institution which is under the direction or control of a body established for religious purposes to discriminate against an employee or prospective employee to prevent them from undermining the religious ethos of the institution.

This broad exemption covers thousands of workers in this State. It includes teachers, special needs assistants, nurses, doctors, health care assistants, charity workers and others. Given that close to 95% of our primary schools, 50% of our secondary schools and many of our hospitals are church-run, this is a particularly serious issue. The legal meaning of this section is to permit discrimination against workers to maintain the religious ethos of the institution. In practice, it means that LGBTQ teachers and atheist hospital workers can be legally discriminated against.”

Ruth Coppinger welcomed the Government’s decision to accept the Bill, and she hoped it is now moved very quickly. She said that it is a tribute to the social movement that took place around the marriage equality referendum. She said that, if that referendum had not been passed in such a decisive way, we probably would not be having this debate or seeing the Government accepting the Bill. She added:

“I wish to illustrate the degree of fear among teachers about coming out as gay or even having a non-conforming lifestyle. I speak as a member of ASTI and as someone who is aware of many cases of teachers who have hidden their sexuality. These people have had to suppress who they are while in work.

We now have a situation where teachers can legally marry a person of the same sex but cannot go into the staffroom and talk openly about it or invite colleagues to their wedding for fear of negative consequences for their employment and promotion prospects. I have spoken to teachers who have told no one at their school they are gay and who continually check themselves in case anyone guesses. This is happening not just in rural areas but in our capital city right now…

Section 37 brings up the historical connection between Church and State in this country. Some 96% of primary schools have denominational patronage and 90% of them are Catholic-owned or run. The situation in secondary schools is not much better. We have schools which are called community schools but there is Catholic patronage in many of those schools as well. This does not reflect a choice among the population. There is a big demand for more diversity. I know this from my own area.

Even if it did reflect the wishes of the majority, minority rights also matter. The United Nations and the Council of Europe have raised this issue of education five times with the State. The State funds all schools. It pays the salaries and trains the teachers, but it allows admission policies which are exclusive and it allows exemptions to employment law.

We need a separation of church and State in this country. That has become patently clear from the marriage equality referendum and from the wishes of the majority in society. It was young people who led that movement. What does it say about the homophobic and transgender attitudes that must be prevalent in many schools if teachers themselves cannot come out? What message is being sent to students who are gay?

Let us not forget the tragic case of Savita Halappanavar. That this is a Catholic country was cited by a health professional. Archbishops are on the board of the National Maternity Hospital. Why? What gynaecological expertise does a bishop have that he would be sitting on a maternity hospital board? We need to separate church and State in order that women receive the care they need and minorities of all kinds are protected. We also have the huge issue of freedom of conscience. People who are not Catholic or religious are being forced to teach religion and to go to schools to which they do not really want to go. I welcome the support for the Bill and I hope it is moved very quickly and not left to gather dust.”

The debate continues this evening, and the Government has said that it will not oppose the vote to bring the Bill forward to committee stage, where it can be discussed in more detail.

The ROSA group is holding a public demonstration outside the Dail at 6pm today when the debate continues.