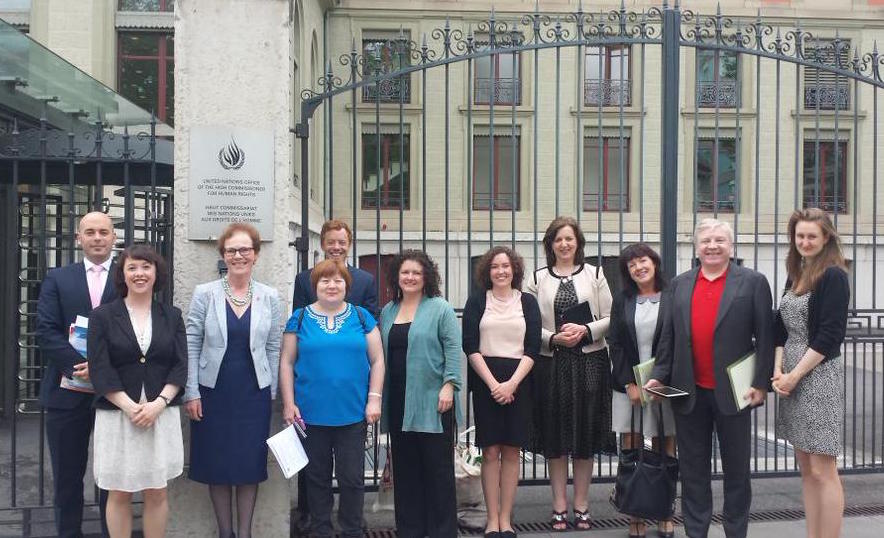 This is the first Atheist Ireland report of our very successful briefing and lobbying session this week in Geneva. The United Nations Committee on Economic, Social and Cultural Rights was questioning Ireland on its human rights obligations. Atheist Ireland was there along with other Irish civil society groups and the Irish Human Rights and Equality Commission.

We still have to see the Committee’s concluding observations, but we are satisfied that they responded positively to Atheist Ireland’s main concerns, including religious discrimination in the education system and elsewhere, and the need to hold a referendum to allow abortion rights to be extended.

This first report is an overview of Atheist Ireland’s live-tweets and our retweets from Geneva. FLAC Ireland also has a tweet summary on Storify, and Liam Thornton has a comprehensive set of summaries on humanrights.ie. Together these give an impression of our collective immediate responses to the sessions.

1. Monday 8 June – before the sessions started 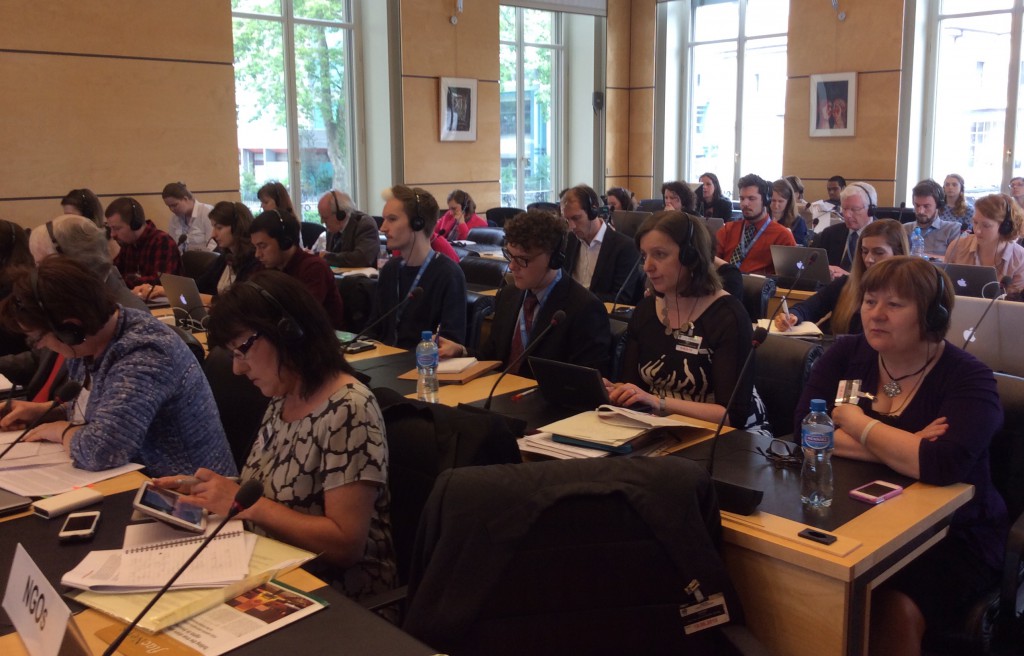 [RT] @ATDIreland Today, NGOs are on frontline for ESC Rights, in Geneva at UN for CESCR, and in Dublin for better Constitution!

[RT] @realrightsIRL Disabled women are twice as likely to experience sexual violence as a non-disabled women in Ire @InclusionIre http://goo.gl/aNCHwS

[RT] @eracampaign We hope the Govt delegation in Geneva will be asked to justify one of its most shameful decisions: the cuts lone parents allowance 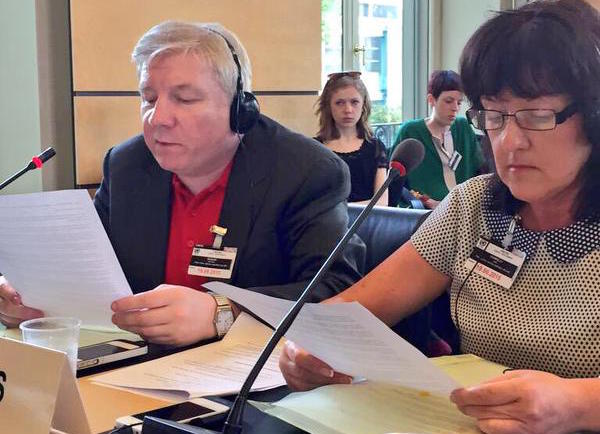 [Atheist Ireland] The Irish Human Rights and Equality Commission preparing to speak this morning at the United Nations. http://fb.me/3JhX4cwRO

[RT] @_IHREC Our full report and Executive Summary is available at: http://www.ihrec.ie/download/pdf/ihrec_report_ireland_and_the_international_covenant_on_economic_social_and_cultural_rights.pdf

[RT] @eamonntansey@maglaundries full investigation must be carries out by state.

[RT] @Noeline_B Jane O’sulliva of @CLMIRL points out how better Systems would be a better use of scarce social welfare resources. @realrightsIRL

[Atheist Ireland] Atheist Ireland has just made this speech in Geneva at the UN questioning of Ireland on human rights… http://fb.me/3TZYualHH

[RT] @IrishFPA Government not upholding its obligations under Covenant by failing to provide women with necessary health care http://ifpa.ie/sites/default/files/documents/Misc/ngo_joint_oral_statement_cescr.pdf

[RT] @eamonntansey@DrLiamT speaks to rights of those in direct provision.

[RT] @CLMirl Irish NGOs have concluded address to UN CESCR. Delighted to have had chance to advocate for right to social security

[Atheist Ireland] UN in Geneva now hearing statements from human rights NGOs in Chile and Uganda, then will ask questions about Irish statements 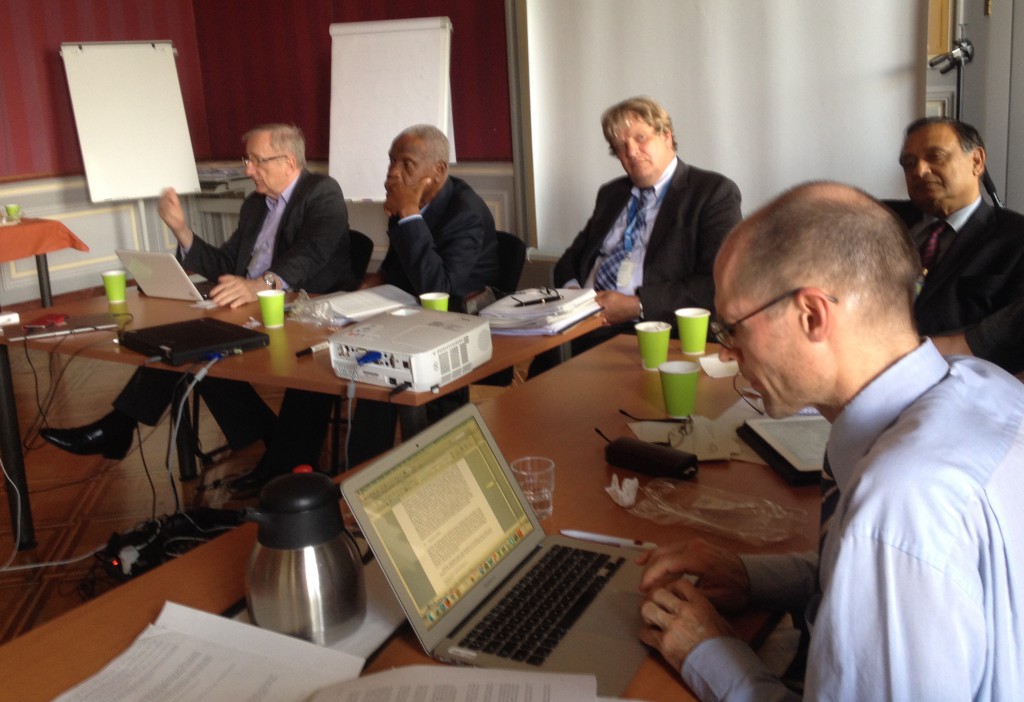 We didn’t live-tweet during this, as it was an intensive lobbying session, with Atheist Ireland and the other Irish groups highlighting our issues in more detail and responding to questions from the UN Committee members.

This session was possibly the most useful part of our lobbying, as we could identify for the first time which issues the Committee members felt strongly about. We will include more detail on this in our next report of the event. 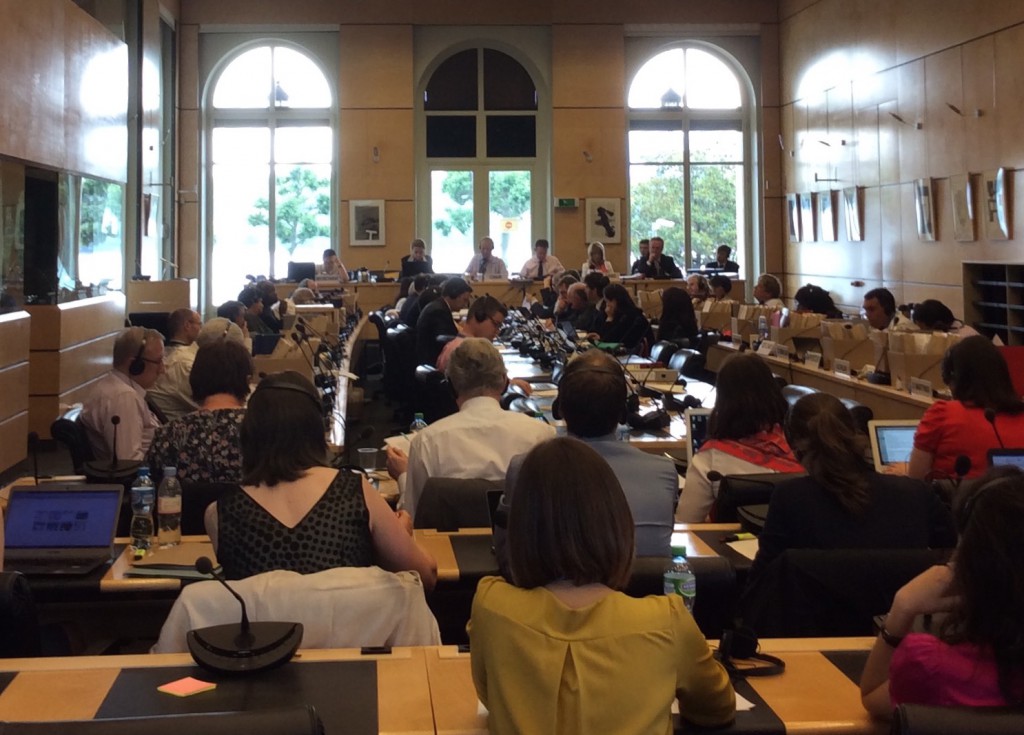 4(a) Opening statement by Ireland

[RT] @eamonntansey Jun 8 CESCR questions Govt report data only up to 2008. Period of crisis not contained in state report.

[RT] @sineadsineads Procedural schedule at CESCR moved around in order to accommodate state specialist on #abortion to speak this afternoon. #ontheedgeofmyseat

[RT] @PaveePoint UNESCR asks the State what steps it has taken to protect the rights of Travellers and Roma in Ireland?

[RT] @Noeline_B CESCR committee asks -if Ireland could incorporate European human rights by law why not do the same for the UN covenant?

[Atheist Ireland] UN asks state about EU law and what is the status of the rights in the Covenant.

[RT] @RGallr Committee member Mr Rodrigo Uprimny asks re justiciability of ESR: ‘argument that Ireland has a dualist system is not enough’

[Atheist Ireland] Ms Shin asks what is Ireland’s system of implementing recommendations from treaty bodies, eg on abortion, otherwise it means nothing

[RT] @eamonntansey National woman’s strategy under the spotlight at CESCR.

[RT] @DrLiamT Committee member: “You have 9 grounds prohibiting discrimination? Why only 9 grounds. Discrim should not happen full stop”

[Atheist Ireland] UN asks what are the lessons learned from austerity, what consultation took place.

[RT] @eamonntansey Corporate tax rate and regime, an obstacle to the provision of public services?

[Atheist Ireland] Reading out Article 40.3.3 of the Constitution now

[RT] @PaveePoint Department of Justice representative, State hopes to have new Traveller & Roma Integration Strategy in place by the end of 2015

[RT] @Ka_ODonnell DoJ says the largest group representing Magdalenes say no inquiry is needed. Who is this group? Where is their statement?

[RT] @DrLiamT The Government have but forward “a generous, eh, a humane” scheme as regards Magdelene survivors…

[RT] @DrLiamT Govt official had to correct himself, mistakenly used work “generous” as regards scheme and then said “humane”

[RT] @Ka_ODonnell DoJ IGNORES UN question on why the Magdalene redress scheme was not implemented in full.

[Atheist Ireland] When Ireland is asked how X is consistent with human rights, they just describe X and ignore the question

[RT] @ATDIreland Back to office! Thank you to all of you in Geneva who’re tweeting from CESCR examination! We’re feeling close 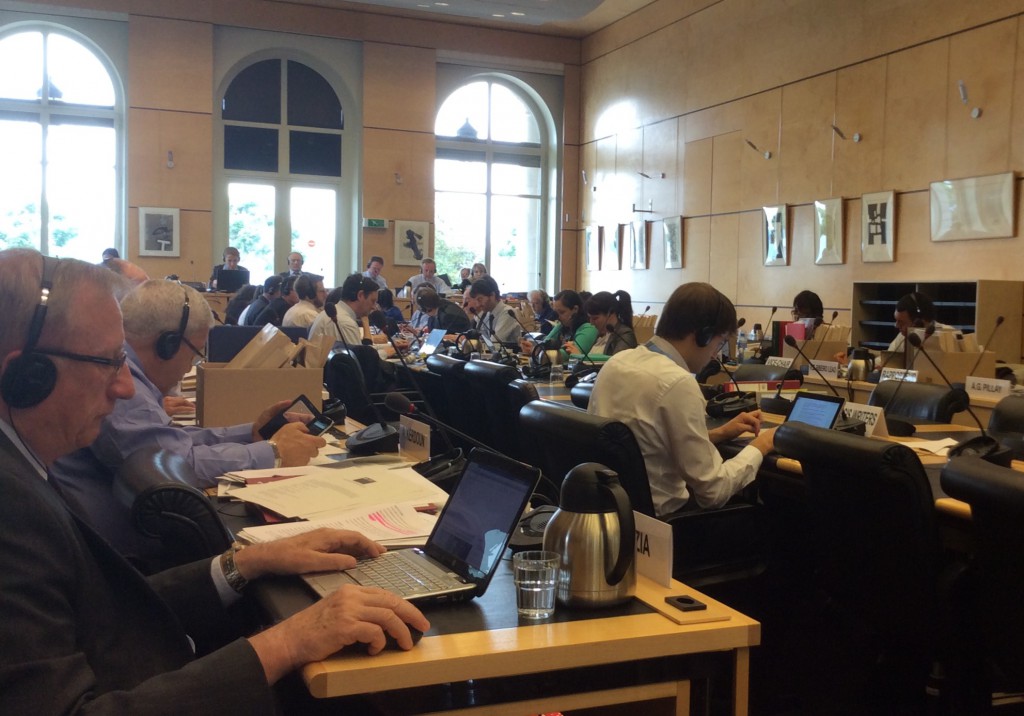 5(a) Second session of questioning

[Atheist Ireland] UN asks state is 8.65 per hour sufficient as a minimum wage

[RT] @CLMirl Why has the CCMA being amended to detriment of borrowers? Qu. from UN – need for appeal and legal advice

[RT] @eamonntansey CESCR Code of conduct on mortgage arrears amended to the detriment of borrowers? #UNIRL Any amendment in sight?

[RT] @maeveorourke UN asks whether Ireland has a national cultural policy. And will Ireland recognise Travellers as ethnic minority?

[RT] @RGallr CESCR member Ms Maria-Virginia Bras Gomes asks what are the remaining obstacles to the recognition of Traveller ethnicity?

[RT] @eamonntansey CESCR seeks further information on the review of the Mental Health Act 2000. #UNIRL What are Govt intentions in this regard.

[RT] @eamonntansey School patronage in the spotlight, many questions in this regard.

[RT] @maeveorourke UN CESCR asks Ireland what impact does Catholic patronage have on selection of teachers in Irish schools? May schools discriminate?

[Atheist Ireland] UN asks state about the access to education, religious curriculum and the employment of teachers in the education system

[RT] @maeveorourke UN CESCR asks #Ireland why only 7,500 social housing units will be built in 2015 when 25,000 new homes are needed annually

[RT] @Barnardos_IRL CESCR asks Ire how it ensures child care is offered to parents. Currently among most expensive in OECD and a key child poverty issue

[RT] @KittyHollandIT Chair of UN committee say division between Chch and State in Ireland seems “fuzzy”. Says this division is “sacrosanct” in most Eur.

[Atheist Ireland] State claims Article 40.1 (freedom from discrimination) is an extremely strong protection against all forms of discrimination

[RT] @cathosx Having waived their legal rights,the @maglaundaries women cannot access that which they were promised

[RT] @RGallr State response to CESCR re paid paternity leave: we don’t have current provision, but hopes to progress introduction in budget 2016

[RT] @eamonntansey Govt CPRD – ratification will take place after review of legislation. What ever happened to Progressive realisation??

[RT] @eamonntansey Govt – May need to amend Equality legislation to remove travellers from 9 grounds of discrimination if ethnicity is realised.

[Atheist Ireland] Ireland has run down the clock in answering early questions, now only 2 mins per topic left

[Atheist Ireland] Session now ended, most questions to Ireland not answered orally, will have to be answered in writing over next 48 hours

[Atheist Ireland] UN tells Ireland that it hasn’t answered, if giving women their abortion rights requires a referendum, why not have a referendum?

[Atheist Ireland] UN chair concludes by saying we have established some bridges, but the bridges are not long enough 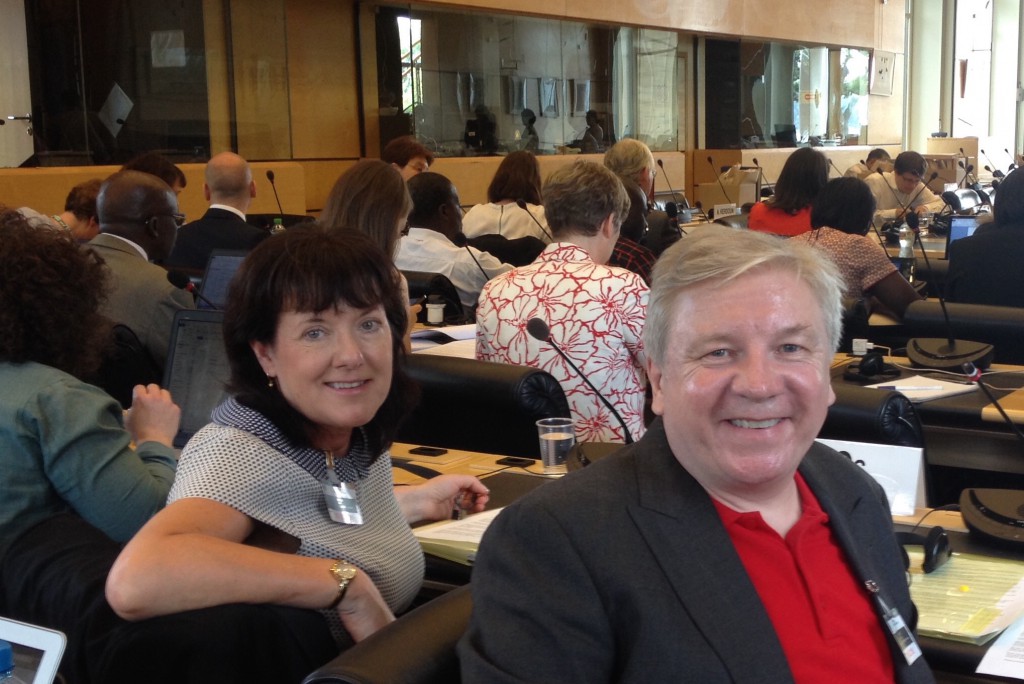