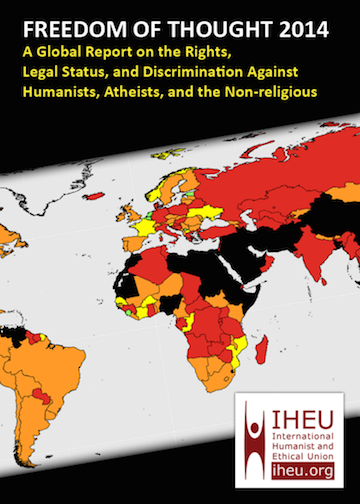 The IHEU Freedom of Thought Report 2014 highlights the discrimination and persecution faced by atheists around the world. But there is also good news. Three countries — Belgium and Netherlands in Western Europe, and Estonia in Northern Europe — are rated Free and Equal societies for atheists. Six more countries meet some of the Free and Equal criteria, but without enough information to be fully rated. They are Sierra Leone in Western Africa; Kosovo in Southern Europe; Taiwan in Eastern Asia; and Fiji, Kiribati and Nauru in Oceania.

And nineteen countries meet enough criteria to be rated Mostly Satisfactory. They are Burkina Faso, Cape Verde, Cote d’Ivoire and Senegal in Western Africa; Republic of Congo and Sao Tome & Principe in Middle Africa; Mozambique in Eastern Africa; France in Western Europe; Norway in Northern Europe; Slovenia and Macedonia in Southern Europe; Ukraine in Eastern Europe; Japan in Eastern Asia; Marshall islands, Micronesia and Palau in Oceania; USA in North America; and St Kitts and Nevis in the Caribbean.

Also, the world is becoming more secular. A detailed survey in 2012 revealed that religious people make up 59% of the world population, while those who identify as “atheist” make up 13%, and an additional 23% identify as “not religious” (while not self-identifying as “atheist”).

And while there is a backlash against this secularism by religious states, that backlash is placing atheism and secularism as part of the national discourse. This is the first step in actually bringing about secular changes in society and institutions of state.

So what makes Belgium, the Netherlands and Estonia so free and equal?

Here is more detail on the three most Free and Equal countries.

Belgium, a nation of 10.8 million, has a federal constitution embracing Brussels, Flanders (Dutch-speaking) and Wallonia (French and some German-speaking). Over 40% of Belgium’s population are said to be non-believers/agnostics (no religious affiliation) or atheists.

1(a) Constitution and legislation

The Belgian Constitution states that:

“Enjoyment of the rights and freedoms recognised for Belgians must be provided without discrimination. To this end, laws and federal laws guarantee among others the rights and freedoms of ideological and philosophical minorities.”
“Freedom of worship, its public practice and freedom to demonstrate one’s opinions on all matters are guaranteed”
“No one can be obliged to contribute in any way whatsoever to the acts and ceremonies of a religion or to observe its days of rest.”

1(b) Religion or belief neutrality

The government provides subsidies (payment of salaries, maintenance and equipment for facilities and tax exemptions) for certain officially recognized religious or belief groups agreed with parliament. In determining which groups to recognize, the government examines organisational and reporting requirements. The religious or belief group must have a structure or hierarchy, a “sufficient number” of members, and a “long period” of existence in the country. It must offer “social value” to the public, abide by the laws of the state, and respect public order.

The existing recognised groups include Catholicism, Protestantism (including evangelicals and Pentecostals), Judaism, Anglicanism (separately from other Protestant groups), Islam, Orthodox (Greek and Russian) Christianity, and secular humanism. Unrecognised groups do not receive government subsidies, but may worship freely and openly.

A 2011 study of total public support at all levels of government noted that subsidies were not proportionate to the relevant populations. The Catholic Church received a more than the proportion of its adherents.

The Belgian government has curtailed the wearing of the veil in public; schools have the authority to ban children from wearing headscarves at school. Whether these infringe rights of some Muslim Belgians remains a contested subject.

The public education system, from kindergarten to university, requires strict neutrality in the presentation of religious views, except with regard to the views of teachers of religion or humanism as expressed in the classroom. Religious or “moral” instruction is mandatory in public schools and is provided according to the student’s preference. All public schools are required to provide teachers for each of the recognized groups. Public school ethics teachers are nominated by a committee from their group and appointed by the community government’s education minister.

Private authorized religious schools following the same curriculum as public schools are known as “free” schools. They receive government subsidies for operating expenses, including building maintenance and utilities. Teachers in these schools, like other civil servants, are paid by their respective community governments.

1(e) Freedom of expression and media

Freedoms of speech and the press are guaranteed by the constitution and generally respected by the government. Internet access is unrestricted. Belgians have access to numerous private media outlets. The concentration of newspaper ownership has increased in recent decades, leaving most of the country’s papers in the hands of a few corporations.

Netherlands is a democratic, constitutional monarchy in Western Europe, generally recognised as a very liberal and progressive country.

2(a) Constitution and law

The constitution and other laws and policies protect freedom of thought, conscience and religion, as well as freedom of opinion and expression. These rights are generally respected in practice.

As of 2013, the Dutch Penal Code no longer criminalizes “blasphemy”. The abolition of anti-blasphemy laws was agreed by the Dutch House of Representatives (lower house) and then finally abolished by the Senate (upper house) in December 2013. However, also in December 2013, a parliamentary motion was approved that, via an amendment to another statute, would broaden prohibited speech to include “serious insult to religion”. (The Freedom of Thought-report 2013 stressed its concern about a possible revival of the blasphemy law through this mechanism.) However, in 2014, a special commission advised against the restoration of ‘blasphemy’ in this way. Humanist campaigners in the Netherlands do not, for the moment, foresee any further attempts to reintroduce anti-blasphemy laws.

It is a crime to engage in public speech that incites hatred against persons on the ground of their race, religion or (non-religious) belief, gender, sexual orientation and (dis)abilities. Dutch Penal Code also penalizes defamation of groups because of their race, religion or conviction, sexual orientation and (dis)abilities, but these laws do not prohibit general criticism of persons, ideas or institutions.

The educational system is divided between public and ‘special’ (“bijzondere”) schools. Both are funded by the state. Special schools are based on a religious or secular pedagogical system. Approximately 2/3 of all schools are special schools, most of which are religious.

Special schools are allowed by law to refuse pupils and teachers on the basis of their lifestyle or belief-system and have the rights to be secretive about their financial situation and funding, but this applies both to religious and to secular-pedagogical special schools. In practice only the very orthodox religious schools use this measure. This year a majority of political parties in the parliament took the initiative to change this possibility by implementing an acceptance-duty in the law.

Neither the Dutch Humanist Association, Humanistisch Verbond nor any other Humanist group, run humanist schools until now, and are in general in favour of public and inclusive schools. However, humanists are permitted to, and do, provide ethical education from a humanistic perspective in public primary schools. The funding of this education is in frequent danger, because of budget cuts.

2(d) State funding, but with neutrality

The government provides no direct financial support for religious or secular, philosophical or humanist organisations. But counsellors (both religious and humanists) in the army, the penal and health-system are fair and equally financed by the government.

Netherlands has a reputation as a liberal and largely secular country. More that half of the population is considered to be non-religious. Organised Humanism is prominent and surveys have shown that a large proportion of non-religious identify explicitly with humanism. Given that, government research-institutes are still neglective in changing their dated classification for society.

Same-sex marriages have been legal in the Netherlands since 2001. It is guaranteed that in every town a same-sex marriage can be registered, but a small number of local governments did hire new civil servants who could refuse to conduct such ceremonies. This possibility had ended in 2014 due to an initiative-law of the parliament, that has been adapted by both chambers.

Due to the influence of two small orthodox-Protestant parties in negotiations on budget deals, the non-religious political parties made several concessions by delaying the introduction of secular bills. There is still a lack of transparency concerning these arrangements.

Ten years ago, in 2004, filmmaker Theo van Gogh was brutally murdered by an Islam-extremist. This left an important mark on the debate on free speech ever since. During the 10-year anniversary of his death, opinion makers stress that – although you are permitted by law to use ones right of free speech – there is still fear of violence resulting in a certain self-censorship in the public debate about religion in general, and Islam in particular. Social pressure inside conservative religious groups – against for instance women, sexual minorities and more liberal religious views – is of ongoing concern.

Since gaining independence from the Soviet Union in 1991, Estonia has developed a stable, functioning democracy and performs well across international measures of fundamental freedoms. Eurobarometer polls consistently place Estonia as one of Europe’s least religious countries.

3(a) Constitution and law

Freedom of religion and non-discrimination for religious beliefs is provided for in the constitution, in the Churches and Congregations Act 2002 and in the Equal Treatment Act 2008. Non-religious ‘belief’ is not specifically referenced, though freedom of religion or belief is upheld in practice, and Estonia has one of Europe’s, if not the world’s, highest proportions of non-religious citizens.

The law specifies that individuals are never required to disclose their participation in a religious group, which may offer non-believers some further protection from discrimination.

At school level, religious tuition is optional. Upon the request of at least 12 students, religious instruction must be made available, but state schools must adhere to a national syllabus which requires discussion of world religions with an emphasis on fostering tolerance and does not promote any particular church. A non-religious alternative is not offered.

The full report, Freedom of Thought 2014: A Global Report on Discrimination Against Humanists, Atheists, and the Non-religious; Their Human Rights and Legal Status, was created by the International Humanist and Ethical Union (IHEU). It includes ratings and evaluations for all countries in a comprehensive 542-page resource.

If you have updates, additions or corrections for the report please email report@IHEU.org or visit the report website at http://freethoughtreport.com.