In the absence of any public comment by PZ Myers, Stephanie Zvan has posted a defence of part of his smear that I am defending and providing a haven for rapists. You can read Stephanie’s post here.

I believe this argument trivialises a very serious allegation – that a person defends and provides a haven for rapists. This is an allegation that should have serious consequences for the target if it is true, and for the maker if it is false. It should not be watered down into a vague ambiguity that could encompass almost anything you want it to.

In this post I will show why Stephanie’s is not a reasonable interpretation of PZ’s smear, either based on the evidence of PZ’s own words, or based on what a reasonable person would read it as meaning, which is the first test for whether it is, on the face of it, defamatory.

1. PZ’s own words make clear what he means

During this overall incident, PZ is repeatedly on record – before, during and after making his Twitter allegation – as describing my blog as “a haven for the nastiest of the slymepitters” and as “Slymepit Ireland”, then as “a haven for slymepit scum” where “Nugent is fostering some rather wretched characters”. Indeed PZ describes one such person by name as “frequently commenting” on my blog.

Taking all of these uses of ’haven’ together, it is unambiguous what PZ means by me “providing a haven” in this context. He means that identifiable people are actually commenting on my blog who also post on the Slymepit, people who PZ frequently refers to in dehumanising terms.

Indeed, when asked, PZ specifically said that the presence of these people as commenters on my blog was “the evidence” that I am providing a haven for rapists. You can read here how PZ repeatedly failed to substantiate or withdraw that smear.

Here are his before, during and after uses of the word haven.

On 19 September PZ wrote in a comment on Stephanie’s blog:

“Yes, please, do go ahead and complain about that mean poopyhead Myers (in the politest possible language, of course!) — I’m not going to care. Nugent’s site is already a haven for the nastiest of the slymepitters, so how much does he think an accusation of rudeness coming from that cesspool is going to impress me?”

On 4 October, just four minutes before he tweeted the ‘haven for rapists’ smear, PZ referred to my blog as “Jaysus. Slymepit Ireland.” 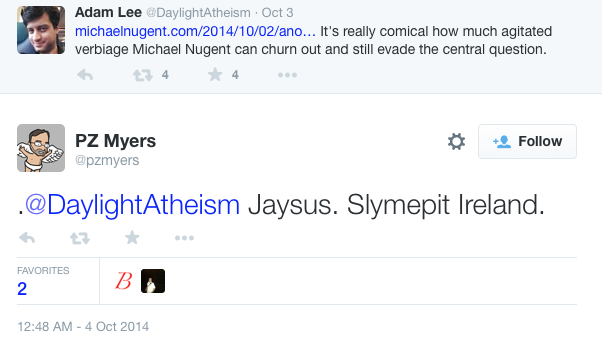 Just four minutes later, in his very next tweet, PZ made the ‘haven for rapists’ smear, then specifically stated that “the evidence” for the smear was that people who post on the Slymepit also comment on my blog. 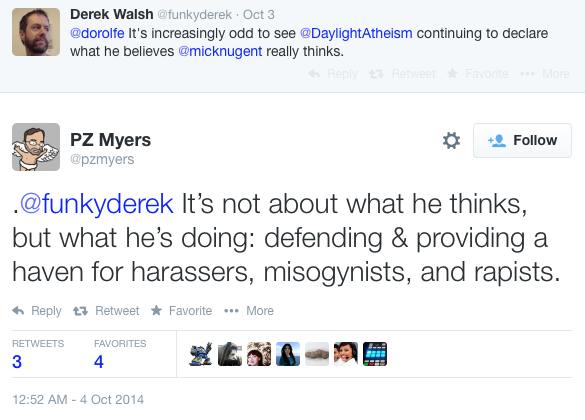 Derek Walsh – “It’s increasingly odd to see @DaylightAtheism continuing to declare what he believes @micknugent really thinks.”
PZ – “It’s not about what he thinks, but what he’s doing: defending & providing a haven for harassers, misogynists, and rapists.”
Derek – “that’s an incredibly serious accusation and one completely unsupported by evidence. But you know both those things already.”
PZ – “Nope. The evidence is right there: his blog commentariat is populated almost entirely by slymepitters.”

PZ was then asked five times the question of how people commenting on my blog who also post on another website constitutes evidence that I defend rapists, in response to any of which he could have clarified and withdrawn and apologised for the claim, if that was not what he meant. Instead he continued the exchange on the basis of this claim. He answered questions that were specifically about how I am defending rapists, by referring to who is commenting on my blog, making a hypothetical analogy with the Ku Klux Klan praising him.

Stephanie has recently suggested that it is the comments, not the commenters, that PZ was concerned about.

However, PZ was clear that he was not asking me to delete any comments by these people but was judging me by the company that I keep.

On 7 October PZ wrote on his blog:

“[a blog post elsewhere] was apparently made in retaliation for me pointing out to Michael Nugent that his blog is a haven for slymepit scum, so one of those scum had to vent his fury… As for my suggestion that Nugent is fostering some rather wretched characters, this same Cavanaugh person is frequently commenting there, and here’s his latest.”

So that is PZ repeatedly on record – before, during and after making his Twitter allegation – as describing my blog as “a haven for the nastiest of the slymepitters” and as “Slymepit Ireland”, then as “a haven for slymepit scum” where “Nugent is fostering some rather wretched characters”. Taking all of these uses of ’haven’ together, it is unambiguous what PZ means by me “providing a haven” in this context.

2. How a reasonable person would read PZ’s words

Even without the repeated corroboration by PZ that he uses the word haven to refer to identifiable people who actually comment on my blog and also post on the Slymepit, most reasonable person would read the Twitter exchange as meaning what it says on the face of it.

That is the first interpretation test of whether an allegation is on the face of it defamatory – whether it would lower a person’s reputation among reasonable people, not whether an esoteric benign interpretation could be hypothetically put on part of it, four weeks later, by somebody else.

And that is even without putting the smear into its full context, which is a wider allegation that I am defending and providing a haven for harassers, misogynists, and rapists. For most reasonable people, that would conjure an unjust image of me as a very unpleasant and immoral person, who actively defends and shelters serious criminals.

For the time being, I am parking the allegations that I am defending and providing a haven for harassers and misogynists, partly because of the flexibility of interpretation that some people grant themselves in using the words harasser and misogynist. But I also strongly dispute both of these smears, and I will return to them once I have finalised the smear about rapists.

3. My email correspondence with PZ

As I said in my last post, I have also emailed PZ to ask him to withdraw and apologise for his smear.

I am not publicly discussing the detail of that email exchange, other than to say that he has also declined to withdraw and apologise, and when I asked him to clarify some ambiguous assertions in his response, he replied ‘Not interested.’

However, given Stephanie’s intervention, I will add that the context in which PZ used the word ‘haven’ in these emails was unambiguously referring to people who actually comment on my blog.

4. Stephanie’s interpretation of the word ‘haven’

Independently of PZ’s smear against me, I will grant that Stephanie has outlined her own personal interpretation of the term ‘providing a haven for rapists’, and in a later post I will ask her several questions that arise from applying that standard to commentary on FreeThought Blogs and elsewhere.

Why Stephanie Zvan’s defence of PZ Myers’ ‘haven for rapists’ smear is not reasonable based on the evidence
By Michael NugentPosted on October 31, 2014October 31, 2014