Yesterday David Quinn of the Iona Institute tweeted that “To this day the World Health Organisation recommends symphysiotomy in certain circumstances”.

He did not add that these “certain circumstances” are only as “a life-saving procedure in areas where caesarean section is not feasible or immediately available,” as outlined in the World Health Organisation guidelines for midwives and doctors on managing complications in pregnancy and childbirth.

Nor did he add that the World Health Organisation says that “Risks include urethral and bladder injury, infection, pain and long-term walking difficulty. Symphysiotomy should, therefore, be carried out only when there is no safe alternative.”

Nor did he add that the World Health Organisation’s review conditions for symphysiotomy include that “caesarean section is not feasible or immediately available; and the provider is experienced and proficient in symphysiotomy.”

None of these circumstances remotely compare to the human rights abuses of symphysiotomy practice in Ireland as condemned yesterday by the UN Human Rights Committee.

Caesarian section was possible in Ireland

The World Health Organisation sees symphysiotomy only as a life-saving procedure in areas where caesarean section is not feasible or immediately available.

But Ireland was clearly an area where caesarean section was both feasible and immediately available.

However, that feasibility and availability was subverted by the institutional belief system that the UN Human Rights Committee chairperson described as seeking to dominate the Irish State.

The Chairperson of the UN Human Rights Committee, Nigel Rodley, a former UN Special Rapporteur on torture, also said that he had been kept awake at night thinking of the symphysiotomy abuses in Ireland.

That symphysiotomy can sometimes be used, but only as a life saving procedure when no safe alternatives area available, is entirely irrelevant to its use to further the Catholic belief system in an Ireland where those safe alternatives were available but not used.

In response to various criticisms of this tweet, David replied:

So what are the “certain circumstances” in which the World Health Organisation recommends symphysiotomy?

This guide represents a common understanding between WHO, UNFPA, UNICEF, and the World Bank of key elements of an approach to reducing maternal and perinatal mortality and morbidity. These agencies co-operate closely in efforts to reduce maternal and perinatal mortality and morbidity. The principles and policies of each agency are governed by the relevant decisions of each agency’s governing body and each agency implements the interventions described in this document in accordance with these principles and policies and within the scope of its mandate. The guide has also been reviewed and endorsed by the International Confederation of Midwives and the International Federation of Gynecology and Obstetrics.

The Section on Symphysiotomy: (p 53)

Symphysiotomy results in a temporary increase in pelvic diameter (up to 2 cm) by surgically dividing the ligaments of the symphysis under local anaesthesia. This procedure should be carried out only in combination with vacuum extraction (page P-27). Symphysiotomy in combination with vacuum extraction is a life-saving procedure in areas where caesarean section is not feasible or immediately available. Symphysiotomy leaves no uterine scar and the risk of ruptured uterus in future labours is not increased. These benefits must, however, be weighed against the risks of the procedure. Risks include urethral and bladder injury, infection, pain and long-term walking difficulty. Symphysiotomy should, therefore, be carried out only when there is no safe alternative.

(It then continues with detailed guidelines for carrying out the procedure)

Image from the WHO Guidelines 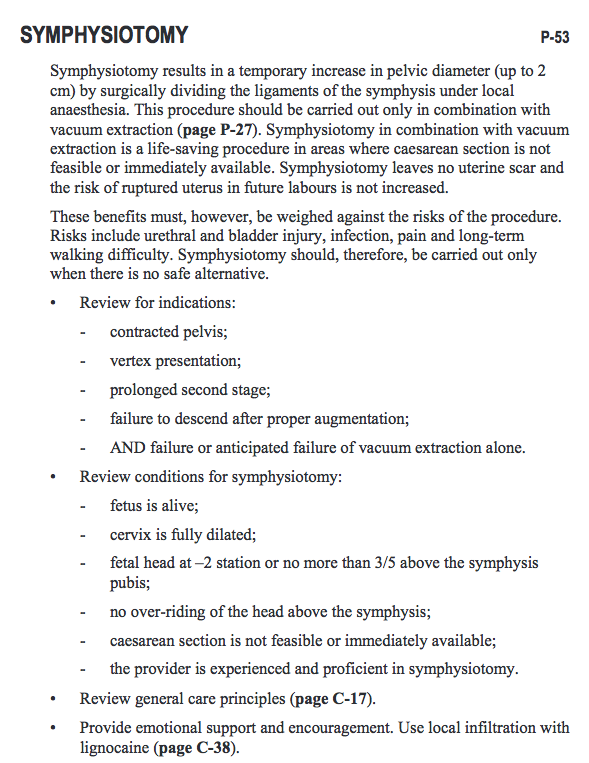 Symphysiotomy is only for saving lives in areas where caesarian section is not possible – World Health Organisation
By Michael NugentPosted on July 25, 2014July 25, 2014