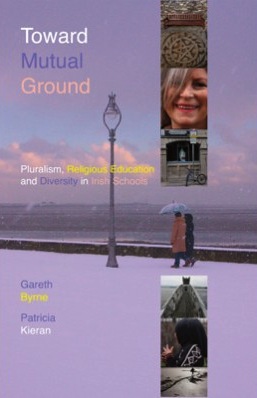 Jane Donnelly and I wrote a chapter on secular education and human rights for the book ‘Towards Mutual Ground – Pluralism, Religious Education and Diversity in Irish Schools’ edited by Gareth Byrne and Patricia Kieran and published last week by Columba Press.

Here is an extract from the chapter by Jane and me.

There is one fundamental question that informs all debate about pluralism and patronage in education. That question is posed here as an option:

1. Do you wish to bring about an education system that satisfies the desires of a majority of parents and children, (perhaps to satisfy the desires of those who happen to share your own personal religious beliefs) regardless of the wishes of minority groups?

The manner in which a person answers these foundational questions determines what conclusions they arrive at.

It is understandable that many parents, and representatives of particular religions, have as their priority an education system that satisfies their own desires, and the desires of those who think like them. However the role of the state should be to counteract this self-centred approach, and to ensure that the education system respects equally the human rights of all parents and all children. In practice, the only way to ensure this is for the state to establish a secular education system.

A secular education system would be neutral on the question of religion and non-religion, and it would allow further educational options to develop as a supplement and not a replacement to that secular system. Religious schools or atheist schools should be an added extra for parents who want to avail of them, if they can afford them. However having religious schools as the foundation of the educational system creates only the illusion of choice.

This chapter argues that society should be pluralist and not the state. Indeed, the only way to protect the rights of everybody in a pluralist society is for the state to be secular. The state has a positive obligation to ensure fairness for everybody. The State should not be a partisan player that focuses on the desires of the majority ahead of everybody’s rights. Furthermore, contrary to the belief of many people in Ireland, there is no human right to have the state fund a religious education for every family in the country.

There are good philosophical reasons for establishing secular schools that are neutral on the question of religion. It is good for society that all children can be educated together. The recent history of Northern Ireland illustrates how segregated schooling contributed to the difficulty children experienced in understanding and respecting each other across religious divides. Secular schools bring children together. They teach children subjects that have a basis in scientific fact, such as mathematics and languages and history and critical thinking. Secular schools teach children common ethical values such as fairness, tolerance, compassion, justice and civic cooperation. They teach them about different religious beliefs and help them to understand other beliefs and respect other people. Therefore, outside of school hours, the children’s parents and churches can teach them more about their own specific beliefs about the nature of reality and personal morality.

In practical terms, the establishment of secular schools is the only way to ensure that everybody has their human rights respected with regard to education. The education policy of Atheist Ireland is based on the human right to be educated without being indoctrinated with religion and to be free from proselytism. Atheist Ireland is equally opposed to children being indoctrinated with atheism.

This policy is based on international human rights legislation. In considering the demand for diversity, the human right to respect the religious and philosophical convictions of all parents, and not just those of a majority, should not only be considered but guaranteed without discrimination in the Irish educational system. By ratifying the European Convention on Human Rights and various other United Nations Conventions, the Irish State has already agreed to guarantee to respect all parents’ religious and philosophical convictions in the Irish education system, and not just those of a majority.

In theory, it could be possible to respect everybody’s rights by having different schools for parents and pupils of every religion, in addition to schools for parents and pupils of no religion, and to have enough of each of these schools built and operating in every part of Ireland to make it possible to vindicate every parent’s rights in practice. However, in reality, this is financially and logistically impossible. In a pluralist society, the only way for an education system to vindicate everybody’s rights to freedom of conscience, religion and belief, and to respect the convictions of all parents as opposed to the majority, is to establish a state secular education system that is neutral on the question of religion. For it is simply not feasible for the State to support financially the funding of various types of secular or religious schools in every area. Delivering the education system through private bodies where the state funds education on the basis of a particular majority in a given area instead of protecting the human rights of individuals, only results in segregation, discrimination and the denial of basic human rights.

Plurality of patronage will never achieve pluralism in education as no state can guarantee provision of education in accordance with the religious or nonreligious affiliation of every child’s parents. Therefore the patronage system cannot safeguard the preservation of the ‘democratic society’ as conceived by the European Convention. The European Court of Human Rights has stated that the ‘travaux prèparatoires’ of Article II of Protocol 1 (the Right to Education) of the European Convention aims at safeguarding the possibility of pluralism in education which possibility is essential for the preservation of a ‘democratic society’ as conceived by the Convention.

It must also be stressed that the patronage system cannot achieve respect for the religious and philosophical convictions of all parents, because human rights are guaranteed to individuals and not to the religious majority in a given area. The current Irish situation of education represents an abuse of a dominant position. The patronage system in Ireland reinforces the identification of members of society on religious grounds and the provision of services according to religious affiliation. This patronage system coerces parents into identifying with various religious groups in society, with whom they have no real affinity (especially in situations where their children might be refused access to the local school in the event of a shortage of places) simply to access the educational system. In effect parents are being forced to uphold a school’s religious ethos through the act of procuring an education for their children.

The book is published by Columba Press and arose from two conferences held on pluralism in Irish education, in Mater Dei Institute of Education in Dublin in 2011 and in Mary Immaculate College in Limerick in 2012.

Secular schools and human rights: extract from book chapter in Toward Mutual Ground
By Michael NugentPosted on May 4, 2013May 10, 2013

One thought on “Secular schools and human rights: extract from book chapter in Toward Mutual Ground”