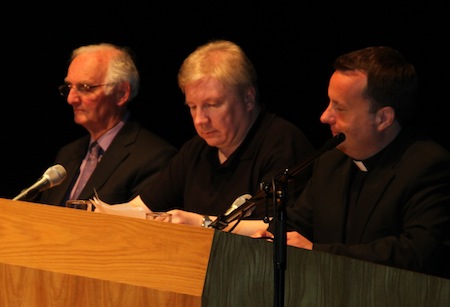 Last Tuesday, I took part in the inaugural event of the new Armagh Faith and Science Partnership. The main speaker was Sir John Houghton, former director-general of the British Meteorological Office and a committed Christian. He gave a lecture on the topic of faith, science and global warming. Father Timothy Bartlett and I then joined Sir John for a panel discussion with audience questions, chaired by the BBC’s Mark Carruthers.

A video of the event will soon be online, courtesy of the Faith and Science Partnership, so in this article I will focus on my own contribution to the panel discussion, as reconstructed from my bullet point notes from the evening.

I began by responding to the main points that Sir John had made in his lecture. I said that when he addressed the issue of global warming, he did so with intellectual rigour and backed up all of his assertions with objective evidence. However, he book-ended this section of his lecture with two assertions that were backed up with nothing. His opening argument was that the universe was very big, and it must have come from somewhere, therefore God must have created it. And his closing argument was that we should take care of the Earth because God has instructed us to.

I said that, for the purposes of this discussion, I was using the word reason to mean belief that is proportionate to the available evidence for the belief, and the word faith to mean belief that is disproportionate to the available evidence. I said that, on this basis, we can divide the meaning of the word God into two different concepts: the idea that an intelligent being caused the big bang, and the idea of specific gods with specific attributes, such as the Christian God.

With regards to the idea that an intelligent being caused the big bang, I accepted that it is possible to hold this belief consistently with science. I did not accept that the belief was likely to be true, for several reasons: we have a consistent pattern of religious explanations for reality being overtaken by natural explanations; quantum mechanics is showing that it is possible for something to come from nothing at a subatomic particle level; and the inclusion of a god into the equation does not answer any questions but merely adds new questions about where such a god came from. So I argued that, when or if we do discover what happened beyond the big bang, it is far more likely to be a natural explanation than a supernatural one.

With regards to the separate idea of specific Gods with specific attributes, and with particular reference to the Christian God, I said that this belief was inconsistent with science. I said that, even if you accepted the hypothesis of an intelligent being behind the big bang, there was no logical route from that to the specific claims that humans have invented about specific versions of a God. I said that the scale of our universe, with over a hundred billion galaxies, each containing over a hundred billion stars like our Sun, made it extremely unlikely that it was all created for the benefit of one species on planet Earth. I also said that the idea of Jesus dying and rising from the dead flew in the face of all that we know about human biology, and that scientists who believe that Jesus rose from the dead are in effect biology deniers.

With regard to Sir John’s argument that we should care for others because we are instructed to do so by the Bible, I responded that morality is a feature of our brains; that it has evolved along with our brains; and that it is based on concepts such as empathy, compassion and reciprocity. I outlined the argument made by Sam Harris that morality is concerned with the impact of our behaviour on the suffering and well-being of conscious beings; that the worst possible world is a world in which all conscious beings are suffering to the maximum extent all of the time; and that every step away from this worst possible world is a step towards good and away from bad. I said that biblical morality, far from supporting this natural morality, actually corrupts it by adding commands that cause us to allow or inflict unnecessary suffering, while believing that we are doing good.

Panel discussion and questions from the audience

These are the responses that I made to issues raised during the panel discussion and audience questions, again reconstructed from my bullet point notes of the evening.

Sir John accepted that the idea (or, as he said, the fact) that Jesus died and rose again is very unusual, but he said that it is not unscientific to believe that an unusual thing can happen. I said that it went beyond being unusual, and that it defied the known laws of biology. I also said that, from a biblical perspective, it was not only Jesus who rose from the dead but also many other dead people rose from their graves and wandered around Jerusalem greeting people.

Father Timothy Bartlett said that there is more to reality than science can measure, and that for example you cannot measure love and put it on a Valentines card. I responded that this was not a religious argument, because atheists and religious people alike experience love and other emotions. However, I said that in principle you can measure these emotions, as all changes in consciousness are mappable onto neurophysiological processes in the brain, although I accepted that this would do little to sell Valentines cards.

An audience member asked me what values I would base society on, if it was not to be on religious values. I said that I would base it on compassion, empathy and concern for all sentient beings, not just human beings.

Another audience member asked me how optimistic I was about progress towards secularism in Ireland. I said that, in the Republic, the population was far more pluralist than it had been thirty years ago, and that the main task today was trying to convince the government that public opinion had already changed and that the laws needed to catch up with that change. I said that, in Northern Ireland, things have obviously moved on a lot since the height of the euphemistically-called “troubles”, and that the Belfast Agreement had helped this progress to happen, but that the Belfast Agreement also institutionalised sectarianism by forcing politicians to register as members of one tribe or another.

Finally, Father Timothy Bartlett said that many modern atheists were attacking a caricature of the worst of fundamentalist religion; that we were implying that religious people are stupid and that we were therefore dehumanising them; and that some of the worst atrocities of the 20th century had been inflicted by secular atheist regimes in Russia and China.

I responded that every atheist that I know is quite happy to say that they may be mistaken and that they would change their mind if there were given new evidence. I said that this was one of the main differences between religious and scientific approaches to seeking truth. I said that I was certainly not saying that all religious people are stupid, and I agreed that it was wrong to dehumanise people. I suggested that Father Bartlett should direct his concern about dehumanising people towards Cardinal Cormac Murphy O’Connor, who recently told the BBC that atheists are not fully human. And I said that the regimes that he described in Russia and China were not based on promoting atheism, but on promoting other ideologies that, like religion, are also based on faith and dogma.

In this article, I have summarised my own contributions to the panel discussion. You can see the entire event on video when the Armagh Faith and Science Partnership puts it online.

Some final thoughts: Armagh is a lovely place, and I will return to visit again at some stage. I was very pleased with the number of secular rational contributions from the audience. I would like to thank everybody who organised the event, in particular Clive Gordon. I would also like to thank Mark Bailey, director of the Armagh Observatory, who kindly arranged for me to be shown around that impressive facility.

My debate at Armagh Faith and Science Partnership with Sir John Houghton
By Michael NugentPosted on May 20, 2012January 22, 2013